Polymorphic is a kinetic installation utilizing an innovative design and engineering solution inspired by the simple kinetic action of a see-saw and the reverberating motion of a Slinky. The design is comprised of a double-sided bench which transforms through a series of 119 unique and interconnected sections into a chaise lounge and finally an interactive balance board.

The sections are connected via an inventive pivot and bolt system which allows the vertical movement of one section to be picked up by others down the line. Together, this motion allows the installation to transform from a series of leveled sections into an undulating form activated through interaction with its occupants.

While the overall form of the bench is realized as a continuous landscape, each seating condition was designed according to existing ergonomic profiles in order to maximize comfort and functionality. This is further realized by allowing the tolerance of its motion to conform to the postures of the occupants using simply their weight as a point of activation for the movement of the sections. 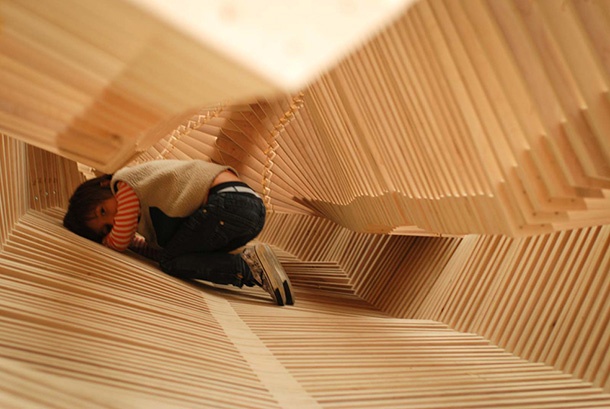 Two simple connections not only provide the stability of the bench but moderate the movement of each individual section as it reacts to applied forces. The first is a sliding bolt connection, which acts as a restraint between sections, controlling the displacement allowed to be carried over from adjacent sections. The second is an elastic connection, which is a typical rubber band that links a series of internal notches together and gives the bench its ‘springy’ quality while providing lateral stability to the installation as a whole. 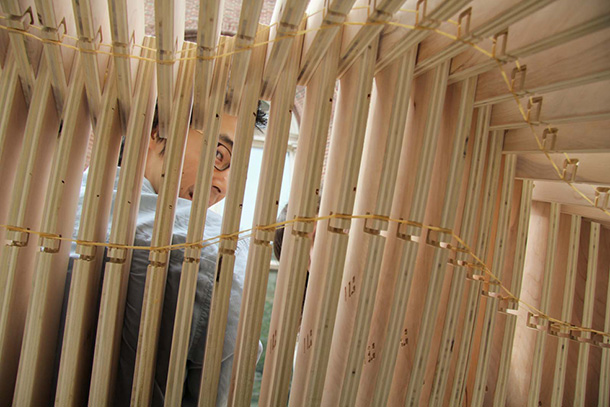 With intent to be a truly interactive design, Polymorphic’s transforming shape consists of six zones and an occupiable interior. These functions allow for new means of interaction, breaking away from the typical uses of a ‘bench’. From the ‘cave’ to the ‘surfboard’, users are encouraged to sit, lounge, climb, jump, rock, or push the installation.

At its core, the design of the installation is not only an inventive solution to a design idea, but also a test of the limits and capabilities of digital fabrication and its role in advancing architectural and industrial design practices. While the installation had a designated scale and dimension, the developed system has the ability to grow much larger and wider depending on the availability of resources and materials. The form of the design can likewise be readily adjusted to suit the conditions and contextual requirements of various spaces and environments. The scalability of the joint system and design together creates a truly parametric system in which its use is not only for aesthetics, but for construction, functionality, and comfort as well.

The design of Polymorphic was inherently sustainable, due to the financial constraint of a $1000 budget. The design was broken down into small and linear pieces that maximized the quantity fit on a sheet of plywood. In total, the entire installation only used 18 sheets of plywood, which were utilized at over 90% efficiency. 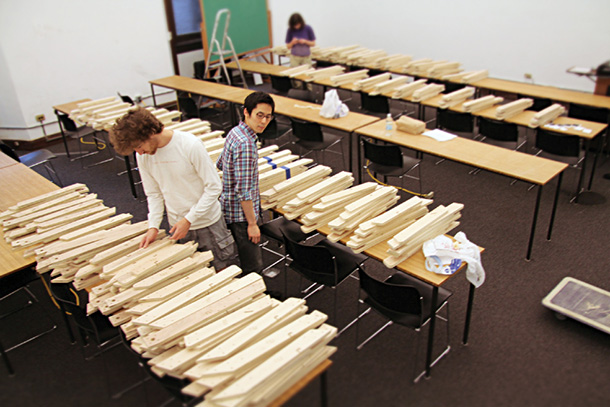 Unlike the typical adaptation of a scripting component to generate design, Polymorphic uses scripting mainly as a method of production. The automated process serves as a transitional tool from digital space to the physical realm. After the design was completed, the 3D model was used as the input to generate the 928 pieces necessary for construction. The Grasshopper script was responsible for printing not only the contour of the pieces, but all of the 3 corresponding types of joints, as well as a mill-ready labeling system. This process greatly increased production efficiency, as it was able to accurately output the building blocks of the design. 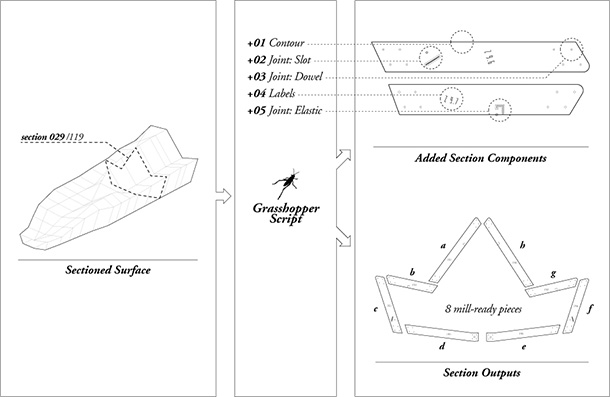 The project is a product of Fast Pace/Slow Space, a course taught by Brigette Borders and Mark Bearak, at the Graduate School of Architecture, Planning and Preservation, Columbia University. 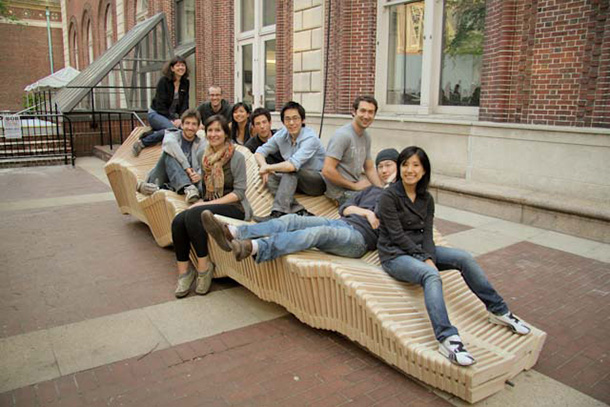