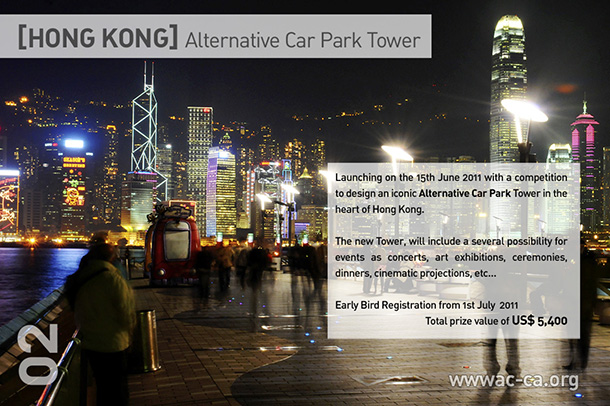 The parking structure has captured the imagination of novelists, photographers and film-makers, an yet it remains peripheral to our culture – best understood as forbidding fictional setting or often as an imposing silent building that we encounter along the way.

Car parks are not very appreciated by users (too cold, too dark, too insecure etc.) and this competition hopes to offer a new take on this type of building that is far too quiet.

Hong Kong situated on China’s south coast and enclosed by the Pearl River Delta and South China Sea, is renowned for its expansive skyline and deep natural harbour. And with a population of seven million people, Hong Kong is one of the most densely populated areas in the world. Much of Hong Kong’s terrain is hilly to mountainous with steep slopes of which less than 25% of the territory’s landmass is developed and about 40% of the remaining land area is reserved as country parks and nature reserves.

Aim of the competition

The aim of this International competition is to design an iconic and Alternative Car Park Tower in the heart of Hong Kong. The new tower will include several possibilities for events such as concerts, art exhibitions, fashion shows, ceremonies dinners, cinematic projections, etc.

The architecture of this new building should reflect contemporary design tendencies, standing out for its uniqueness as a car park design, while meshing in with the surrounding Hong Kong urban tissue. This competition hopes to achieve the following:

This is a single stage competition with the aim of identifying the most appropriate proposal, which best satisfies the general and specific objectives of the contest.

This is an open international competition hosted by [AC-CA] to generate progressive contemporary design ideas. There are no plans for the Alternative Car Park Tower to be built.

Entrants may register by filling the form and submitting with payment by Debit/Credit card through a secure gateway.

Winning participants will receive prizes totalling US$ 5,400 with the distribution as follows:

There will also be 7 honorable mentions

1st Prize, 2nd Prize and 3rd Prize will be published in following magazines as well as on the [AC-CA] website:

Further information about the competition on the [AC-CA] website: http://ac-ca.org/en/project01