The distinguishing feature of the Lanzarote Island, one of the Canary Islands, is its old windmills, or molinos. The island has limited natural sources of energy — it has no running streams and no woodland. What it does have, however, is ample wind, and for centuries Lanzarote has used wind power both to grind grain and to pump water. The island still has several remaining mills, but many of them are now in ruins. To give a second life to these abandoned structures, French artist Vincent Leroy develops a concept project titled “Molinoptere” that proposes to turn them into both art objects and wind turbines.

The first research is developed on the example of the former windmill of Buenavista Lanzarote Country Suites. Leroy envisions a wind turbine of a new kind grafted on a stone basement of the mill. Set in motion by the constant wind of the island, the turbine produces soft energy that returns then to the local electricity grid.

At the same time, “Molinoptere” is not only a wind turbine, but it also acts as a wind kinetic sculpture. Its elegant propeller, which is made from curved stainless steel profiles, resembles the wings of a majestic giant butterfly. Slowly rotating in the constant island’s wind, these light and permeable blades strongly contrast to the massive immovable basement underneath.

“Molinoptere” is a project between art and technology, a work that creates a link between past, present, and future. It is only a digital concept now, but how it would be nice if this project was realized and the old Lanzarote windmills became not only working objects again but also new landmarks of the island attracting tourists. 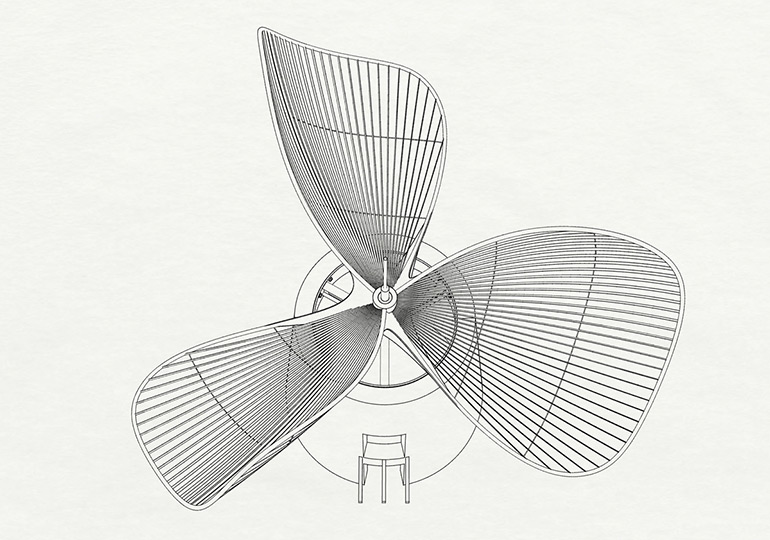