If you are looking for an unusual place to stay in Sydney you should undoubtedly pay your attention to Paramount House Hotel, which opened in the fashionable Surry Hills neighborhood last year. It is a 29-room boutique hotel that occupies a former three-story film storage warehouse of Paramount Pictures Australia (a subsidiary of the Hollywood motion-picture company Paramount Pictures Corporation).

The story of this place began in an adjacent building of the former Paramount Pictures Australia headquarters, known as Paramount House. In 2013, a series of businesses were opened there, including the Paramount Coffee Project Café, Golden Age Cinema & Bar, and The Office Space co-working area. Together, these businesses formed a fashionable local hub, and the adjacent 1930s brick warehouse became a part of this organism in 2018 when Russell Beard, Ping Jin Ng, and Mark Dundon transformed it into Paramount House Hotel. 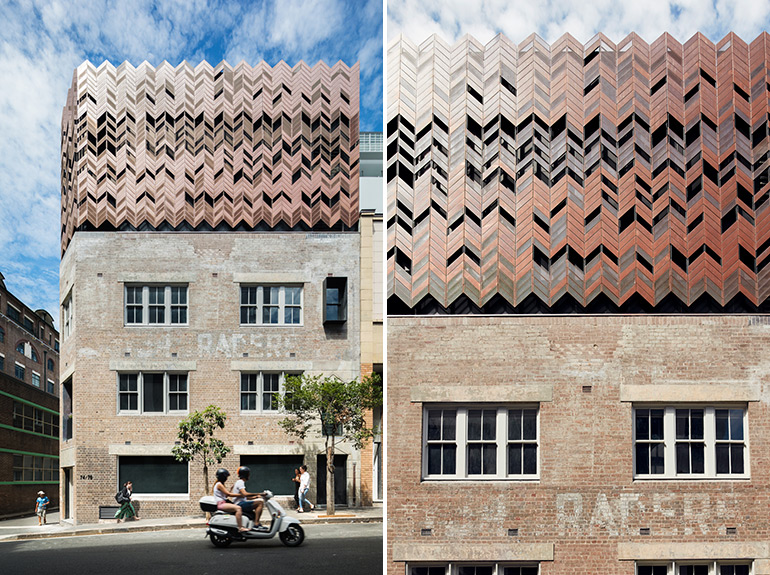 The hotel was designed by architects from the Melbourne-based studio Breath Architecture who needed to stitch together two historic buildings and add 29 hotel rooms, a new restaurant, and a wellness space to the already existing residents.

Breath Architecture: “The clients told us their crazy dreams on this tiny site and we wanted to work really hard to bring those dreams to life. Mark, Russ and Jin wanted to do something special in Surry Hills. They had collaborated on a number of projects before and to us Paramount House was already an incredible organism. The hotel needed to add to this, add to the life of Paramount House and add to the life on the street. It needed to talk to the heritage of the site and of Surry Hills and to the Sydney climate.”

The hotel rises out of the 80-year-old warehouse. A copper, chevron screen crowns the building, reflecting the art deco architectural context of the neighboring Paramount studios. The conceptual approach was about marrying these two beautiful ideas – the artifact and ornament. A former film vault is repurposed for the reception lounge, the overlap with the creative and active program of the Paramount Pictures Building. A hidden atrium space is where the two buildings meet, and where a weary traveler can feel welcomed, looked after, and rejuvenate under the daylight.

Each of the 29 hotel rooms is unique. The existing building is imperfect, with layers of wear that make each suite unique in offering, character, and scale. Columns appear in different locations, unpredictable with remnant building features celebrated. Some suites feature the patinated brickwork, parapet, and gable ends, while others reveal the former stairwells, aged joists, and struts. Traces of ornamentation are embedded throughout – sometimes bold, sometimes subtle. From freestanding, solid timber bathtubs and architectural metalwork, to lush greenery and locally made furniture and ceramics.

Paramount House Hotel was also designed with a priority towards sustainability. Preservation of the existing building fabric was a key to the sustainability strategy. Embracing the historic character and footprint of the warehouse, a series of new spaces are also created. A robust, honest material palette is incorporated throughout, serving a purpose to ensure further longevity of the existing building.

Materials are low in embodied energy and are locally sourced where possible, including recycled timber floorboards, low VOC finishes, and mild steel throughout. Suites are furnished with all locally sourced and Australian made pieces. 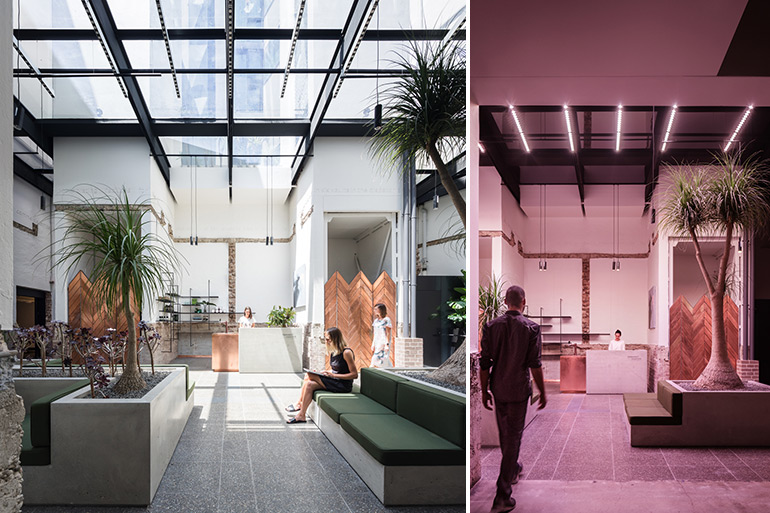 A 7kW PV Solar Array located on the roof deck produces energy to supplement the operational demands of the building. Responding to its context, many of the suites each have a north-facing winter deck, not only encouraging guests to engage with the external environment but also serving a purpose to provide shade and natural ventilation.