One of the latest Sotheby’s auctions, which took place on the 5th of October in London, surprised the art world (and us). Banksy’s Girl with Balloon automatically self-destructed after being sold for £1,042,000 (approx. $1.4 million). Just as the final hammer signaled the end of an evening of auctions, the canvas slid down, and a hidden shredder installed inside a massive gilded frame cut half of the painting into strips.

Girl with Balloon is one of the most widely recognized images by Banksy. Unlike the other editioned iterations of this famous motif, this artwork is a rare unique painting that was given to the former owner by Banksy in 2006 following the artist’s warehouse show, Barely Legal, in Los Angeles. The ornate gilded frame has always been an integral element of the artwork interpreted by some experts as a kitschy emblem of pathos. 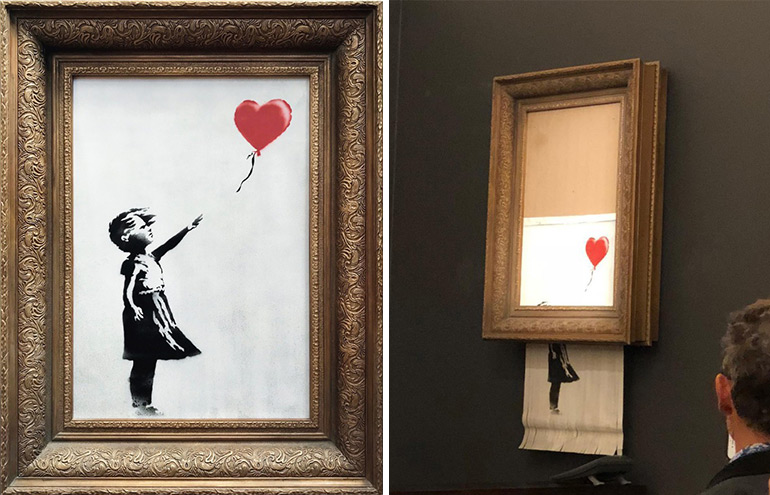 After the incident, the artist published a video in which he showed how he had installed the shredding mechanism into the frame. ‘A few years ago I secretly built a shredder into a painting in case it was ever put up for auction,’ explained the artist in the video.

But this is not the end of the story. According to experts from MyArtBroker, this artwork doubles in value after being shredded at Sotheby’s. The curious fact is that they also received a few inquiries from sellers who wanted to do the same trick with their Girl with Balloon prints: ‘We’ve had a number of Banksy print owners contact us today asking if they shred their artwork will it be worth more. Please, Please DON’T. The events of the last 24hrs are a very unique piece of art history’.

Despite the warning, several days later MyArtBroker received a seller inquiry from someone who shredded their Girl With Balloon print by themselves in order to increase its value.

Ian Syer, Co-Founder of MyArtBroker: ‘Banksy is unique to the art world. No other artist captures the hearts and minds of the public like he does. However, when Banksy does something crazy like shredding his own artwork, it will naturally have a dramatic affect on values. What this person today seems to have done is needlessly ruin a print worth around £40k and reduce its value to almost nothing. We strongly recommend nobody else takes valuable art and tries to cash in on what history will judge a simply brilliant stunt. There are limited numbers of Girl With Balloon prints in the world, today, we lost one and it’s a crying shame.’