In collaboration with HBO and Game of Thrones, Johnnie Walker has unveiled the new White Walker by Johnnie Walker. This limited-edition Scotch Whisky is inspired by the most enigmatic and feared characters on the hit show – the White Walkers – and is being released for fans to enjoy as anticipation builds ahead of the final season.

Jeff Peters, Vice President, Licensing & Retail at HBO: ‘We knew there was fan appetite for a Game of Thrones whisky and once we saw the vision from Johnnie Walker for a way to collaborate we knew the idea was perfect and the time was now. From the beginning, they understood that we wanted to create something special, and they’ve accomplished that with White Walker by Johnnie Walker. We’re confident fans will enjoy sipping this delicious whisky as they wait for season eight and beyond.’ 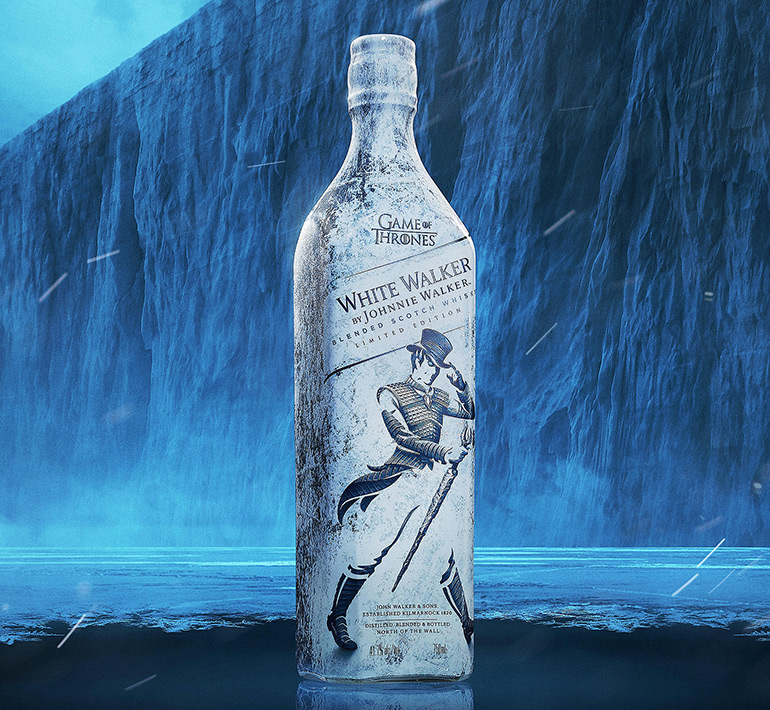 Created by whisky specialist George Harper, alongside the small team of expert blenders at Johnnie Walker, this innovative whisky is best served directly from the freezer, echoing the chilling presence of the White Walkers. The bottling aims to bring consumers to the Frozen North with an icy white and blue design along with the iconic Johnnie Walker Striding Man now fashioned in armour to fit in among the ranks of the Night King’s forces. Utilising temperature-sensitive ink technology, fans will be reminded that Winter is Here from an unexpected graphic icy reveal on the bottle when frozen.

White Walker by Johnnie Walker is part of a wider partnership with HBO and Diageo which will also see the launch of the Game of Thrones Single Malt Scotch Whisky Collection. The collection features eight Scotches that are each paired with one of the iconic Houses of Westeros and the Night’s Watch giving fans an authentic taste of the Seven Kingdoms and beyond.