It is not so rare when water towers become objects of conversion instead of being simply knocked down. In 2014, an old water tower in a protected nature reserve De Wieden in the Dutch province Overijssel was transformed into a watchtower with a viewing platform on the height of 45 meters. The author of this project is a Dutch architecture firm Zecc Architects.

The architects kept the exterior of the tower almost untouched, adding only four large windows alongside the small existing ones on the top of the building. ‘The water tower is a national monument, which made alterations to the exterior and interfering with the reservoir a difficult point, explain the authors, ‘The strength of this plan lies in a combination of extreme restraint on the exterior and an architectural statement on the inside of the tower’. 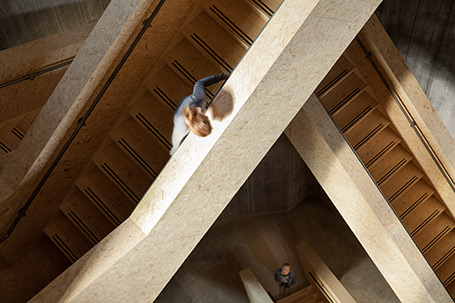 To reach the top viewing platform, the visitors need to walk up a series of stairs inside the tower. The journey begins with a closed staircase that leads to the first floor on the height of four meters. A series of fancy wooden stairs then zigzag across the tower and reach the second floor, which have formerly been the bottom of the preexisting water tank. Here, the original steel stair goes up through a tight space alongside the exterior of the tank and leads to the lookout post on the top of the building.

The lid of the tank has been partly removed in order to create steps to offer more of an overview for groups at the lookout post. The transparent raster floor makes the visitors imagine themselves to be right in the middle of the tank. The large windows provide spectacular views of the surroundings. The public makes an exciting and multifaceted journey upstairs and is rewarded with a beautiful view.