The architects von Gerkan, Marg and Partners (gmp) were awarded 1st prize for their competition entry for the new construction of the Guangzhou City Museum. At the same time, Nieto Sobejano Arquitectos (Madrid/Berlin) won the competition for the adjacent Science Museum which, together with the city’s new Art Museum (commissioned a year ago and being designed by Thomas Herzog Architects), will form the central cultural precinct of this third-largest Chinese city. These cultural buildings surround a large parkland area with squares, which lies to the south of the Canton Tower at the Pearl River.

The design for the Guangzhou Museum includes a reference to the historic Chigang Pagoda, which lies to the north of the building towards the Pearl River. The height of the northern end of the museum will be limited to 18 m, thus respecting the importance of the historic tower building, gradually rising towards the south to a total height of 40 m. This creates a roof terrace facing the Pagoda, which is accessible to the public via external staircases/ramps and, in addition to serving the museum, provides a view to the impressive skyline of the city to the north of the Pearl River.

The increasing height of the building volume can also be perceived inside the museum, which features a central hall with a range of terraced levels. The building, the shape of which has been developed within the urban design context, is characterized by the interaction between linear glazed openings for the entrance area, various commercial functions and restaurants/cafeterias, and opaque parts of the building for the exhibition areas. The calm, horizontal building volume defines the south-western boundary of Lingnan Square, which has been designed as a stage for public life in the city. 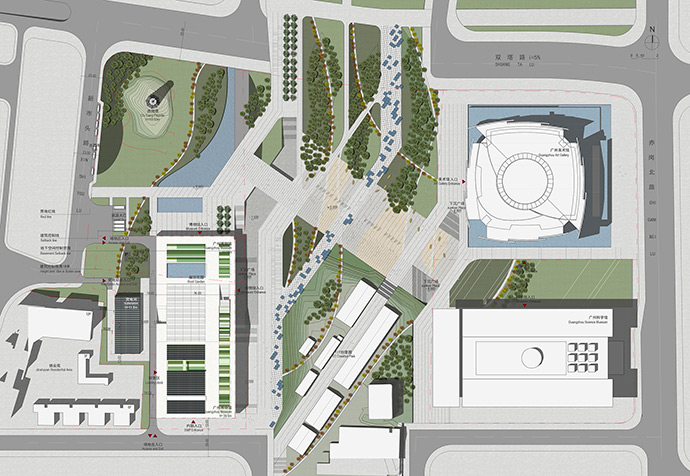