The international student competition The Tower of Babylon was initiated by ETH Zurich in 2011. Within the competition, the student teams from different countries were supposed to design and build a tower using only local materials, their know-how and their hands. Moreover, every project had to reflect a sustainability issue in connection to the limits of their society in their cultures or on their campus.

The whole process was split on four phases. The first phase was set aside for discussions, the second – for developing a concept and design. During the third phase the teams had to make detailed construction plans and buy the materials for future constrictions. The final fourth phase was the building time. The participants had maximum three months for the first three phases and one week or three weekends for construction. Rules of the competition also placed some limitations on the teams’ budgets: all building materials for the towers had to cost maximum 1000 USD if they were not recycled. 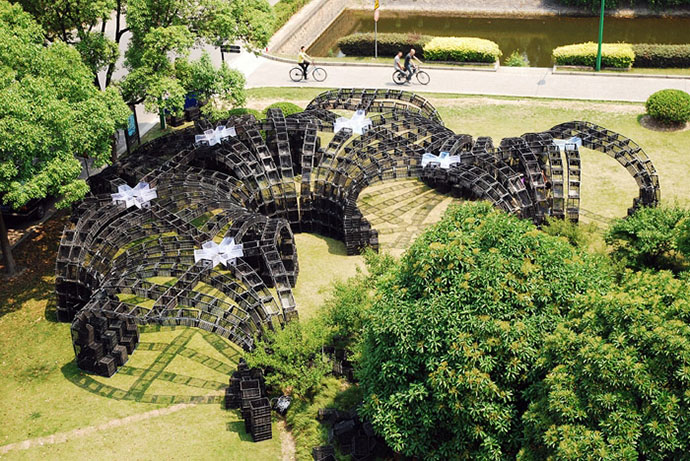 ‘Tower of Babel means a place for communication. We’d like our project to be a place for communicating and in the memory of meaningful events. In nature, there isn’t such thing as waste. Our entire project is about RECYCLING. Thousands of students graduate every year while textbooks, bicycles and other things are sold as waste on the campus. Students need a second-hand market for their exchange. The Commercial Street was a place for commodity trading. But it was closed months ago for renovation. Most students miss it a lot. We’d like to set up a place as a second-hand market in the theme rebuilding the Commercial Street. In order to make the project environmentally friendly, we plan to build it with material easily recycled. After searching the campus, we found fruit basket in different size and color and of good strength a suitable container. It can be returned to the fruit vendors or sold to the recycling stations after our project. So we decide to concentrate on the FRUIT BASKET.

By studying the fruit baskets, we find it of good pressure strength while serving as a whole one. After exploring the possible structures which fruit baskets can be configured, we find the SEMIARCH more reasonable stressed, in better shape and giving more space we need. Most importantly, it can be fabricated FAST. Then we tried to form different space with the semiarch as a unit. In the end of phase II, we found a rather interesting way to realize our project, which give a clear logic at the very first sight. This makes the tower more changeable so that it can be fitted into bases of different shape.

After the completion of the project, plenty of activities took place there. The project will stand there till the end of June. Then we’ll disassemble it and give the baskets to a recycle station.’ 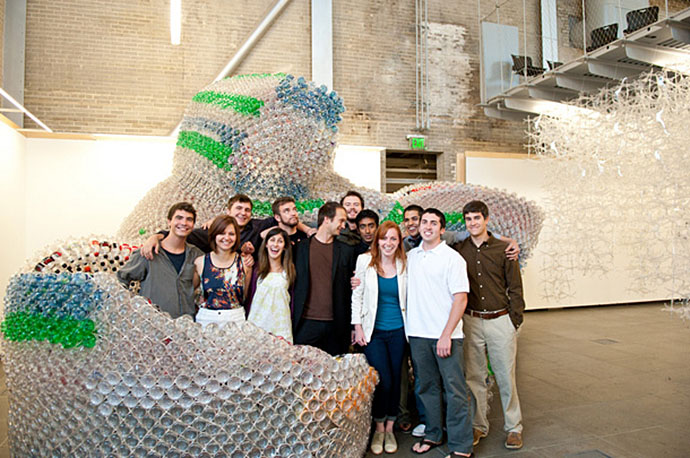 ‘The Tower of Babel stands as a metaphor for the dark sites of civilization. It becomes a metaphor for today’s habits and customs of building in excess, extravagancy in design and dominance of the technosphere. A Cradle To Cradle approach represents a new paradigm for design. “With C to C, as in nature, there is no such thing as waste. ”We believe that sustainability is not a burden: Upcycling provides us with a strategy to deal with old materials and heirloom design with a strategy for designing things in such way that you want to keep them as long as possible because of beauty and functionality.

By studying waste on campus and in the city we identified a series of materials that were wasted or not probably recycled. After diagramming the interrupted life cycle of each material we explored the different materials – coke cans, coke bottles, coat hangers, paper and railway steel plates – by studying their properties to configure and their properties to inform space. Each material had its specific logic of how it aggregates or configures into a larger structure. At the end of phase 2 we decided to focus on plastics.

In phase 3 we?ve refined both material systems and their configurations as stacked structure and as suspended structure. The mayor challenge in this phase was the material collection. From the 3d model we knew that we need around 11000 PET bottles and 6000 PET hangers, which had to be re-claimed as construction material from trash. All the bottles had to be sorted and cleaned. At the same time we?ve produced a set of working drawings that were able to describe each layer of the bottle structure and each suspended module of the hanger structure.

In phase 4 we?ve built the two selected material systems – the suspended structure of cloth hangers and the stacked system of plastic bottles. For both projects modules were pre-assembled: 5‘ x 5‘ wall sections out of PET bottles and cubic modules in case of the hangers. Even though both systems had been tested in larger assemblies, the actual structural and systematic behavior of 12000 bottles and 6000 hangers with flexible joints could only be understood in the actual 1:1 assembly. The installation was build inside of Hinman, the new building of the School of Architecture.’ 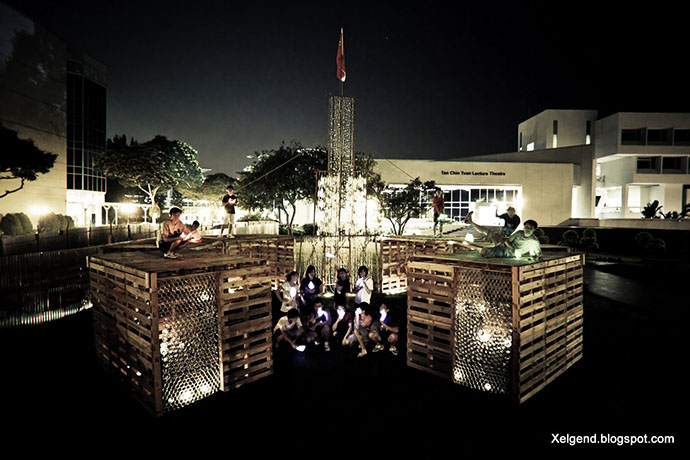 ‘We decided on reconditioned wooden pallets as our core building material for several reasons: they are cheap, readily available and often discarded as trash. Using such pallets was therefore symbolic of our shipping history – a port city which brought our forefathers from different parts of the world together, and gave the pallets an alternative use. It’s hot & humid year round in the tropics and this led us to our interpretation of the Tower of Babylon, i.e. a structure that provides sufficient shade and ventilation where students could gather.

Besides pallets, we also sourced for other recyclables. We decided on 2 materials – mangrove wood and PET bottles. Using these materials, we conceptualized the design using various configurations and orientations. The team was divided into two groups to focus on the design and fabrication aspects. We assembled miniature pallets from ice-cream sticks and stacked tissue boxes to aid visualization and to accurately estimate the amount of materials needed.

Once we confirmed the design of the structure, we analyzed the stress distribution and prepared computer-aided drawings. We decided that a modular set-up using pre-assembled pallets was most the efficient way of assembly. This allowed the structure to be easily dismantled and re-erected at another location. During this phase, 100 reconditioned pallets were purchased for the construction and PET bottles which were collected were cleaned. A suitable building site was selected and marked out.

After the structure was completely dismantled (within 1.5 days), we arraged for the pallets to be given away to a local green waste/recyling company which will then turn them into woodchips for the local landscaping and/or construction industry. The PET bottles were also recycled. The mangrove wood, innings, nuts, washers, etc, were kept and will be reused in other projects.’ 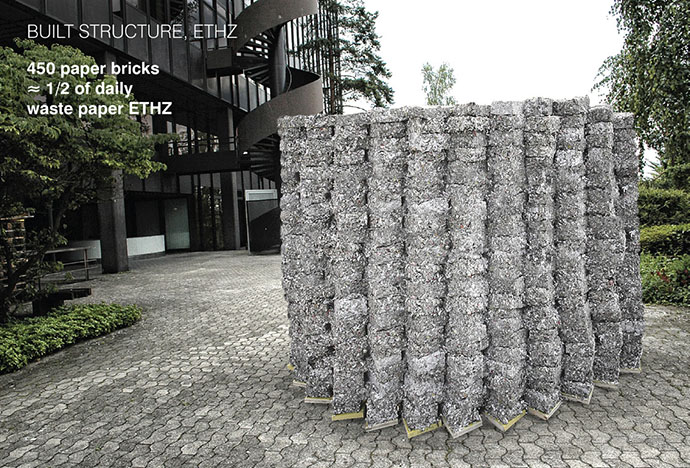 ‘When thinking about the design of the tower we were looking for a shape that could grow as much as we want. There had to be a link between what we were actually building, and the utopist tower that could be constructed with the amount of paper that is wasted each year on the campus. The message had to be strong and straight forward, for people to understand the huge amount of wasted material. Therefore the built structure is only a measure of scale for the enormous amount of paper that is used in the campus and the city.

Our initial decision in the project was to manufacture our own original and sustainable building material. Therefore we used bricks made of paper wastes which we cut up, mixed with water, shaped into a brick and dried in the sun. No other additives were add to the bricks, so the material was fully recycled and eco-friendly what was our main purpose.

To compress paper bricks with sufficient force we build a single-arm lever. Then we made compression test to know what the strength of the brick is and what in fact can be build within this material. The results we obtain were very satisfying – the model brick was stiff and withstand a force of 4000 N.

We managed to gather 720kG in one week during the construction, which was around 144 000 sheets of paper. That represented just a half of one day of ETH waste amount in average with years waste. From that, we built a structure over 2.3m, before we run out of material.

Our intention was not only to give a final structure and design, but also with that to spread knowledge, and awareness of possibilities with paper first for the whole ETH and then also for the city of Zurich. From the statistics we have shown structures in scale, one for the ETH, that is 80m high and 180m long that stands on the campus and it represents one year waste amount, and the other one, for Zurich, 500m high and 1100 m long.’

‘There is a lot of assorted waste in our campus, just occupying space and of no much use to the Institute. We decided to use it along with local sustainable resources and bring the best out of waste. Tower of Babylon was needed for a paradigm shift of that era and on same lines recycling and sustainability is a need of today’s era. We aim at promoting this with our structure.

Our structure, ‘Nirmaan’ will look like a tea kettle along with 3 cups. One of the cups will be used for collecting harvested rain water.

Why cup and kettle?

a) We wanted to create something that appealed to Indian ethos; a kettle and cup symbolize Tea; the country’s darling beverage.

b) The structure should be interesting and innovative and should be aesthetically appealing.

a) Recycling: The structure would be built using waste materials.

b) Sustainability: Other than utilizing waste we will be using local materials which are nature friendly.

c) A message: The structure will promote optimum utilization of things and low cost sustainability to national level via media.’

The IIT team’s proposal was chosen as the winner of the competition that was quite surprising for us: in our opinion, projects by GIT and SJTU teams were more interesting and impressive.