West 57th, designed by BIG, introduces an entirely new residential typology to New York City that will add an inviting twist to the Manhattan Skyline. 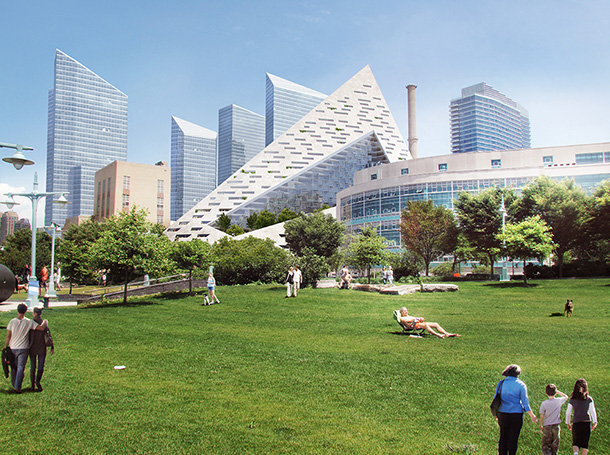 Durst Fetner Residential (DFR) has announced the design of West 57, a 600-unit 80/20 residential building on West 57th Street between 11th and 12th Avenues. The building is designed by renowned Danish Architect firm BIG – Bjarke Ingels Group and is their inaugural North American project. The building’s program consists of over 600 residential units of different scales situated on a podium with a cultural and commercial program. The building will strive for LEED Gold Certification.

It’s extraordinarily exciting to build a building whose architecture will attract visitors from around the globe. BIG’s design is innovative, evocative and unique and the building’s beauty is matched only by its efficient and functional design that preserves existing view corridors while maximizing the new building’s access to natural light and views of the Hudson River. West 57th will establish a new standard for architectural excellence and its creative design, sustainable-construction and operations, breathtaking views and distinctive amenities will make it New York’s most sought after residential address. 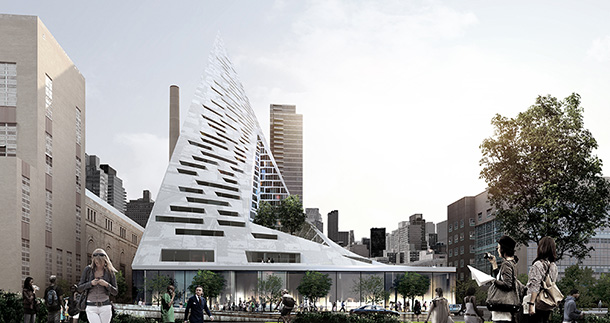 The building is a hybrid between the European perimeter block and a traditional Manhattan high-rise. West 57th has a unique shape which combines the advantages of both: the compactness and efficiency of a courtyard building providing density, a sense of intimacy and security, with the airiness and the expansive views of a skyscraper. By keeping three corners of the block low and lifting the north-east corner up towards its 467 ft peak, the courtyard opens views towards the Hudson River, bringing low western sun deep into the block and graciously preserving the adjacent Helena Tower’s views of the river.

New York is rapidly becoming an increasingly green and livable city. The transformation of the Hudson River waterfront and the Highline into green parks, the ongoing effort to plant a million trees, the pedestrianization of Broadway and the creation of more miles of bicycle lanes than the entire city of my native Copenhagen are all evidence of urban oases appearing all over the city. With West 57th we attempt to continue this transformation into the heart of the city fabric – into the center of a city block.

The form of the building shifts depending on the viewer’s vantage point. While appearing like a warped pyramid from the West-Side-Highway, it turns into a slender spire from West 58th Street. The courtyard which is inspired by the classic Copenhagen urban oasis can be seen from the street and serves to extend the adjacent greenery of the Hudson River Park into the West 57th development.

The building is conceived as a cross breed between the Copenhagen courtyard and the New York skyscraper. The communal intimacy of the central urban oasis meets the efficiency, density and panoramic views of the tall tower in a new hybrid typology. The courtyard is to architecture what Central Park is to urbanism: a giant green garden surrounded by a dense wall of spaces for living. 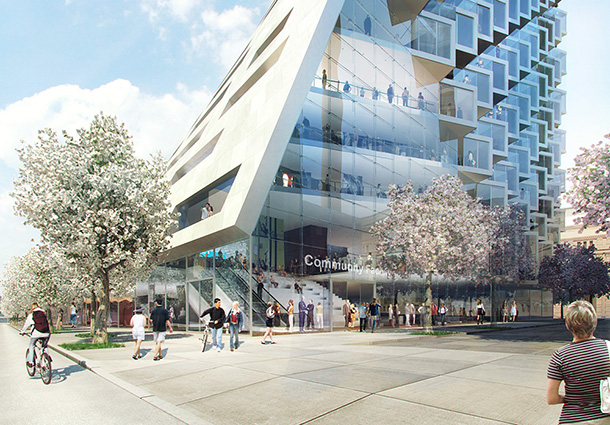 The slope of the building allows for a transition in scale between the low-rise structures to the south and the high-rise residential towers to the north and west of the site. The highly visible sloping roof consists of a simple ruled surface perforated by terraces—each one unique and south-facing. The fishbone pattern of the walls is also reflected in its elevations. Every apartment gets a bay window or a balcony to amplify the benefits of the generous view and balconies which encourage interaction between residents and passers-by. DFR commissioned Copenhagen based BIG in the spring of 2010 to introduce a new residential typology to Manhattan. As of 2011 BIG has opened a new office in New York in order to oversee the development and upcoming construction of West 57th. 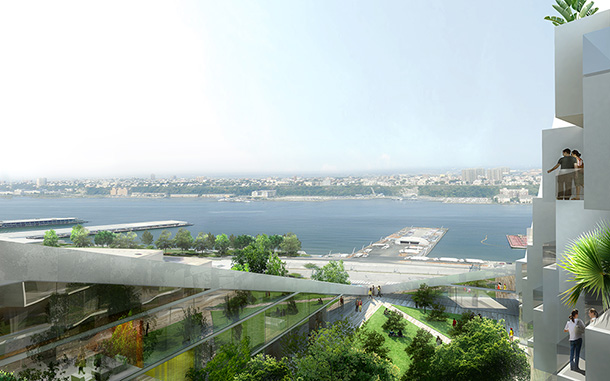