BIG (Bjarke Ingels Group) + Grontmij + Spacescape are the winning team for the Stockholmsporten master plan competition to design an inviting new entrance portal into Stockholm at the intersection of a newly planned super-junction. 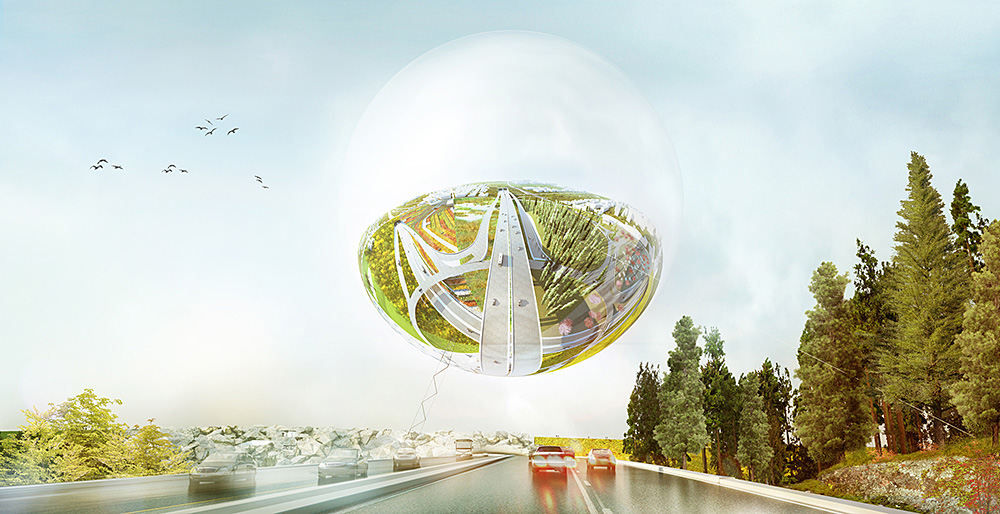 The traffic junction ‘Hjulsta’ is being planned in the north of Stockholm, where the two highways E18 and E4 Stockholm Bypass meets in a three level intersection. The roads create physical and visual barriers between the surrounding neighbourhoods and divide the area into four parts. 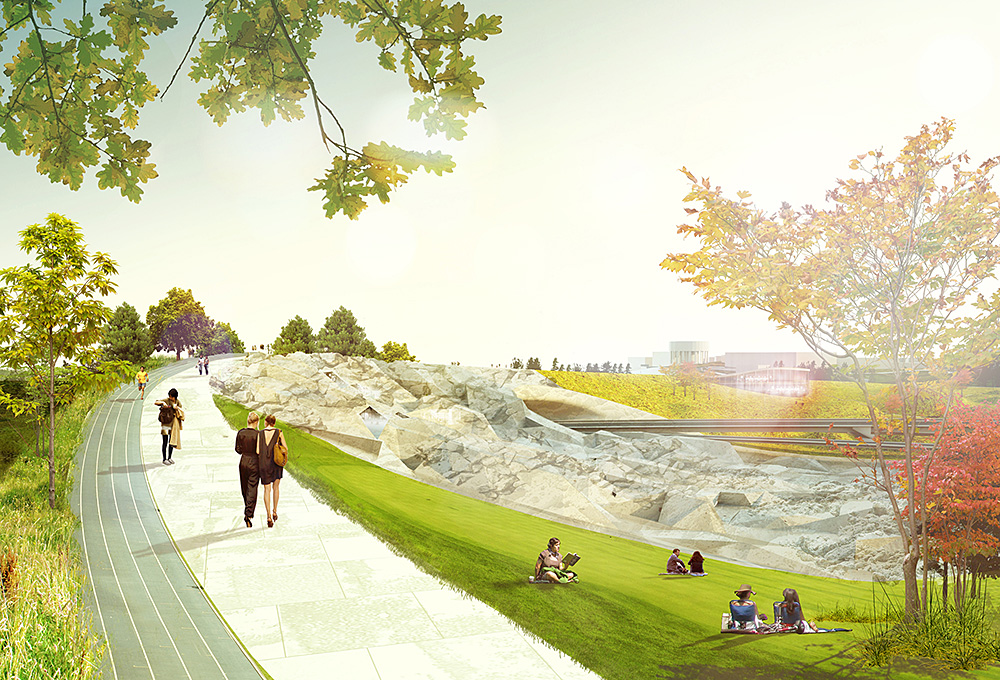 The Stockholm Sphere connects the four parts with a landscape loop. A continuous circular bike and pedestrian path aligned with public buildings and functions reconnects the different areas in an un-hierarchical and democratic way. 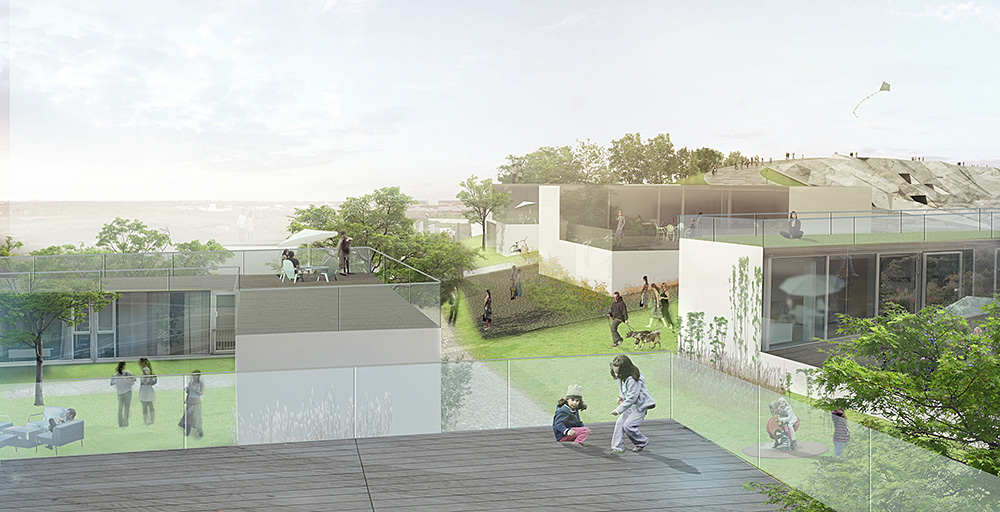 The central valley is turned into a pie chart park with nature of different character. The division of the park creates a diverse experience when moving in or around it.

New facades and buildings are integrated in the current building structure in Hjulsta. Focus is on adding small and large apartments to the existing midsize range. Both J?rvaby and Barkaby expand towards the landscape loop. 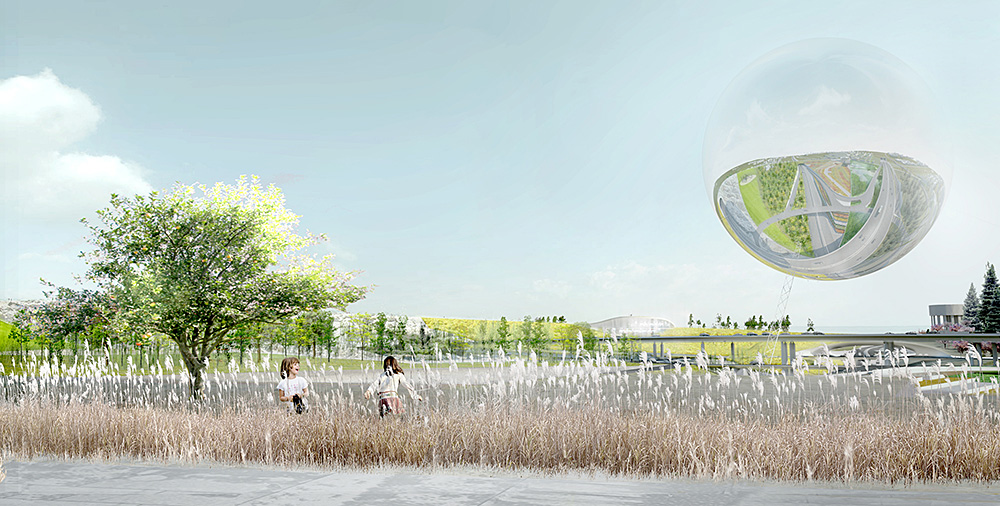 What is a gate, but a significant point you pass? Here that point is turned into a reflective, hovering sphere mirroring Stockholm as it is, new as well as old areas. An always updated, constantly changing icon is created. Photovoltaic film covers the 30% of the surface that faces the sun, producing enough energy to keep the sphere floating and supply 235 houses with electricity. 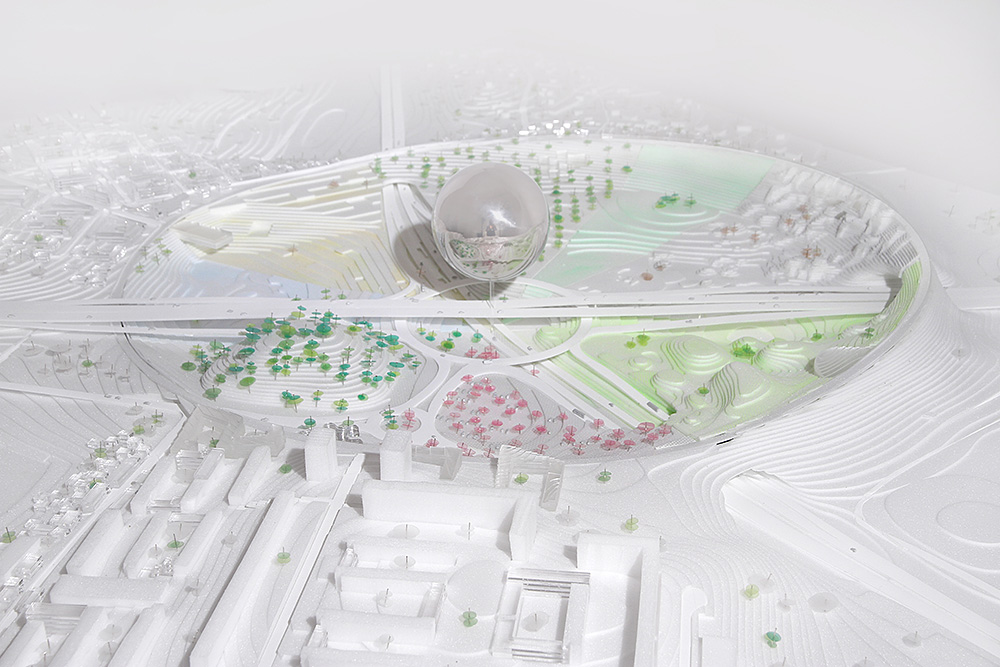 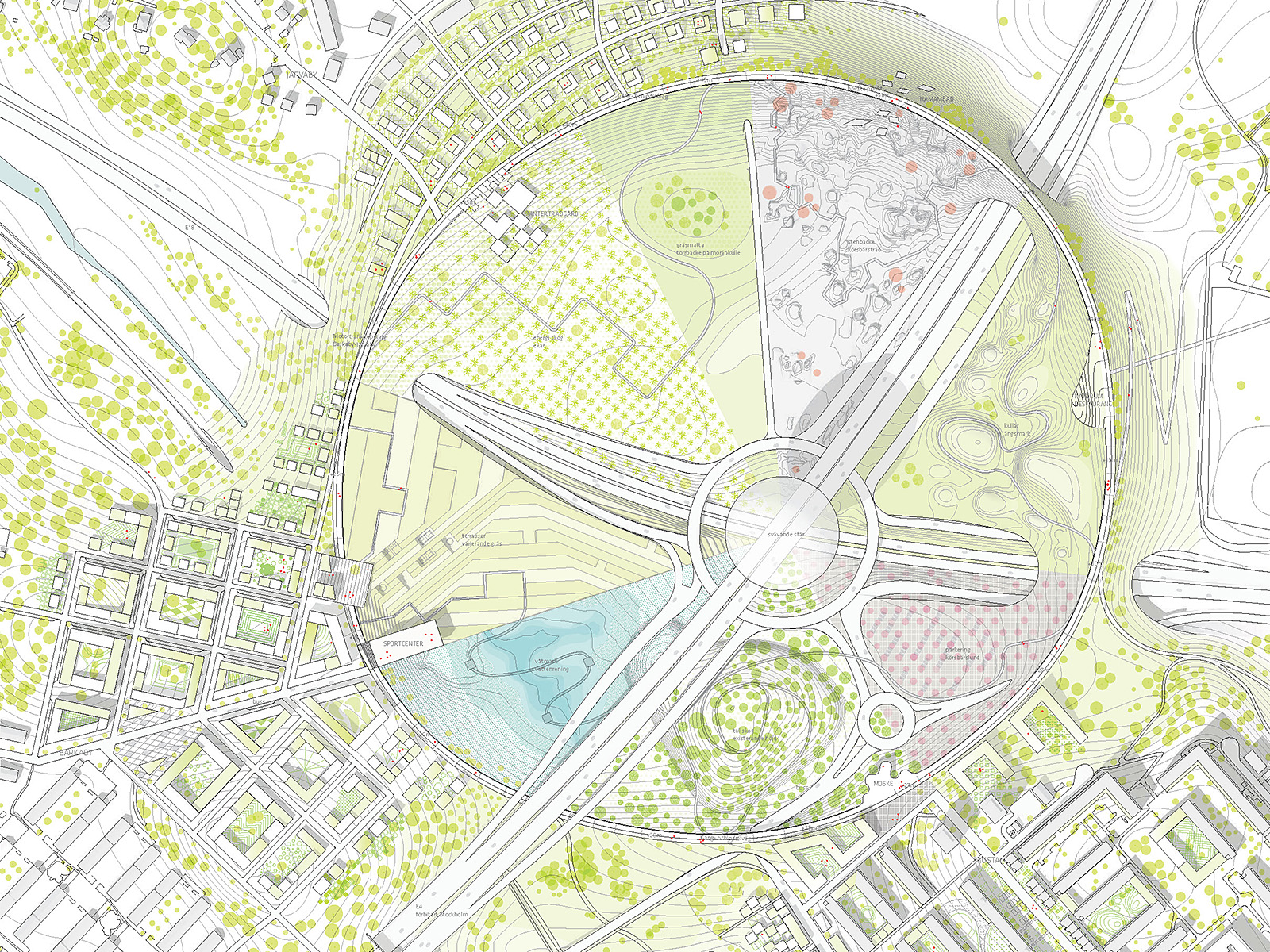 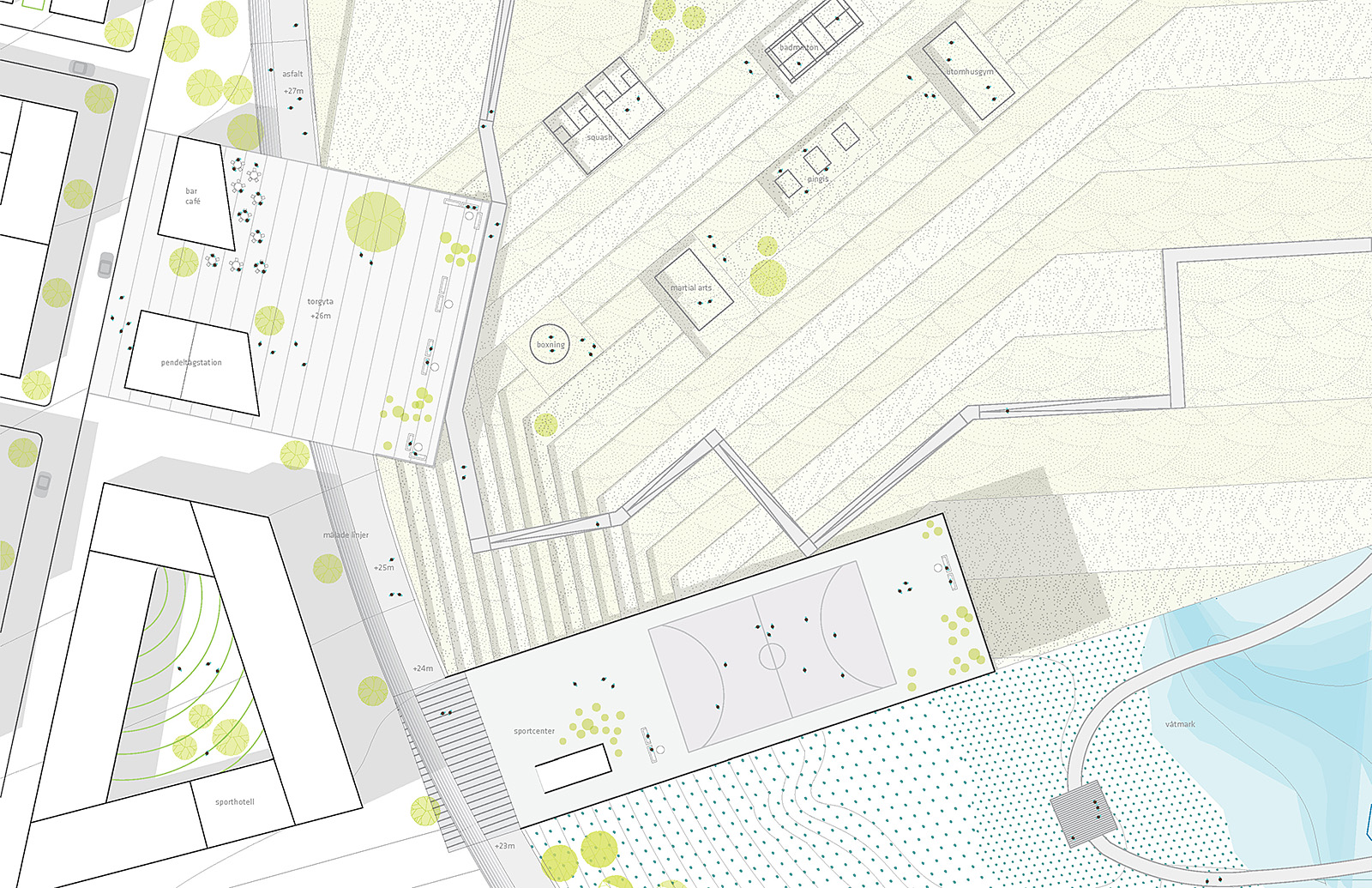 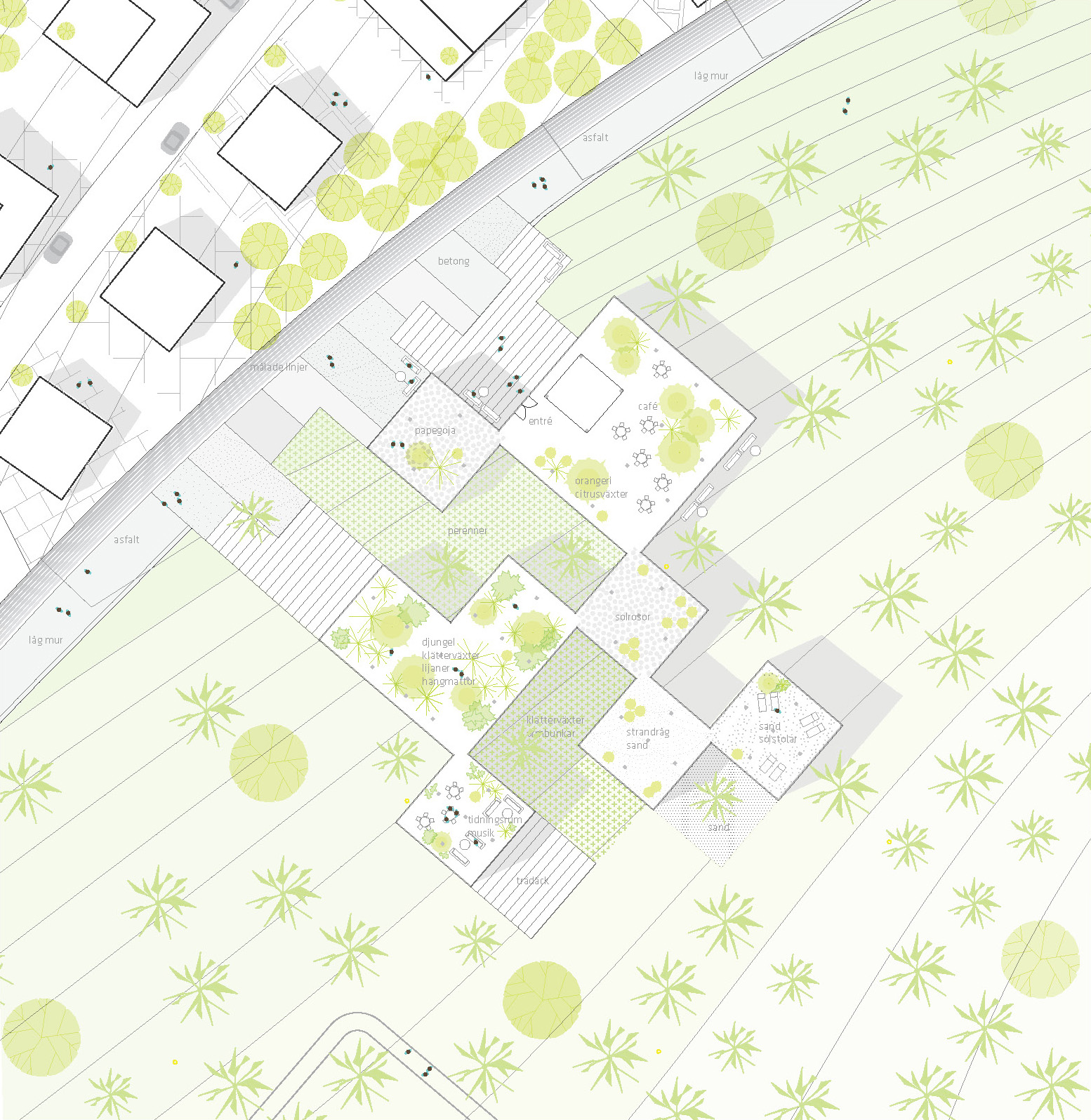 Stockholm on the world map

Marketing itself and being a part of peoples’ conscious is an important part of the City of Stockholm’s ambitions. The aim of Stockholm is to become the capital of Scandinavia. What then can be done in order to generate the attention needed to leave a significant mark on the world map? 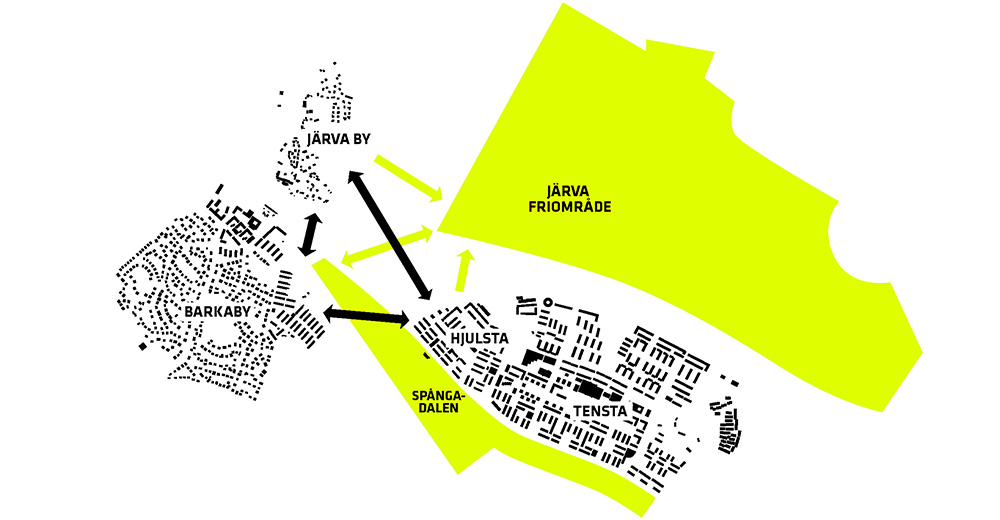 J?rva Friomr?de should be made accessible for the inhabitants of J?rvaby and Hjulsta as well as Barkaby. The three neighbourhoods would also benefit from improved interconnectivity. In addition, a green connection between Sp?ngadalen and the vast J?rva Friomr?de is missing. 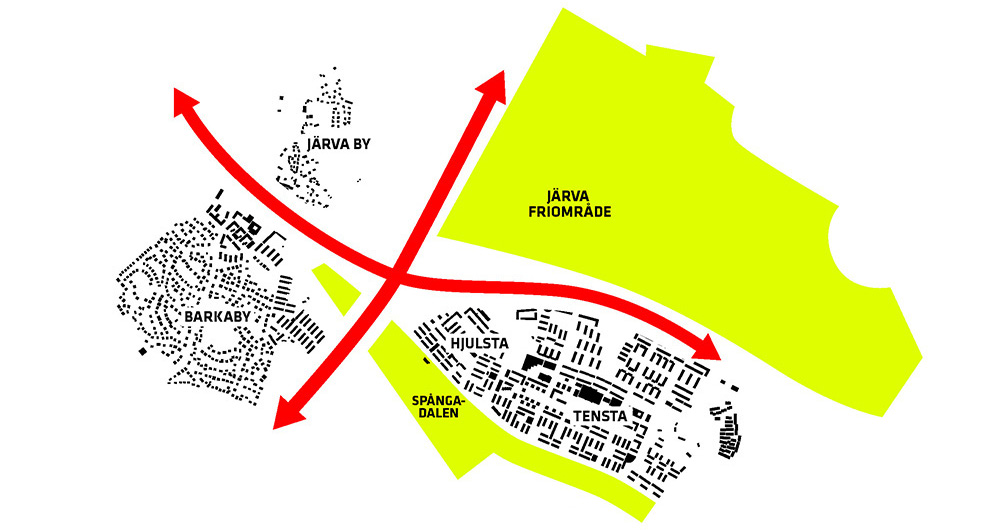 Resulting from construction of the traffic junction ‘Hjulsta’, where two European highways intersect, the area is distinctly cut into four pieces. 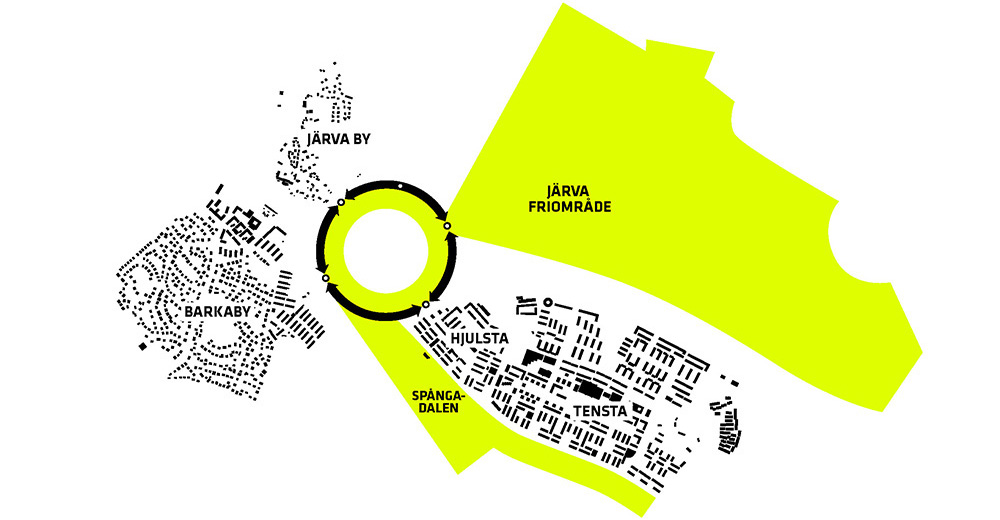 Introducing a loop links the five points defining the path without internal hierarchy. The two park areas are extended into the loop and thereby woven together.

The intersection points between the existing areas and the proposed loop allow new public buildings to be introduced: a sports centre, a winter garden, a hamam bath, a ‘naturum’ and a mosque.

The buildings along these streets are infiltrated and extended until the edge of the loop.

In the area surrounding the intersection an artificial landscape is introduced. Through a pie chart divisions every walk along the loop becomes a diverse and exiting experience.

The excavation mass is transported uninterrupted from the tunnel construction of ‘E4 Stockholm Bypass’ to the new valley surrounding traffic junction ‘Hjulsta’.

High noise levels are a consequence of the heavy traffic on both highways.

The creation of a valley surrounding the intersection separates it from the neighbourhoods, giving them more protection from the impact of the highways.

How do you create a landmark when all you can see is the sky?

The surrounding as a landmark

The reflective sphere turns the surrounding itself into a landmark and lets the driver experience the neighbourhoods through a reflective image on the sphere.

As the technology of harvesting wave energy further develops, the wind will also be a possible source of energy production in the sphere. In a similar way as wave energy is generated from the alternation between compression and tension these forces are an outcome when the wind meets the sphere.

The photovoltaic cells on the surface of the sphere produce energy to light the new streets and supply the new developments with electricity.

The heating of the air, which keeps the sphere floating, is estimated to consume 10% of the energy produced in the sphere. The remaining energy will supply 235 houses with electricity.

The sprayed of reflected surface and the photovoltaic cells protects the PVC-film from UV-radiation. The lifespan is prolonged to 12 years or more.

All transportation of energy to and from the sphere is conducted through structural truss.

Three cables and one structural truss anchor the sphere to the ground. If needed an internal lightweight structure can be introduced to better withstand deformation.

The construction guarantees that the material of the sphere, in case of an emergency, does not reach the highways.