Tokyo is going to be a city with the most impressive public restrooms. Within the Tokyo Toilet Project founded by the Nippon Foundation, 16 world-renowned architects, including Tadao Ando and Shigeru Ban, were invited to design 17 public toilet facilities around the Shibuya ward.

“Public toilets in Shibuya like you’ve never seen,” says the slogan on the Tokyo Toilet Project website. Well, you can check if this is true by looking at the designs below realized this year within the project (the remaining ten public restrooms will appear in 2021).

The renowned Japanese architect Shigeru Ban and his team have designed two public toilet sets in two Shibuya parks — Haru-no-Ogawa Community Park and Yoyogi Fukamachi Mini Park. Public toilets often have a reputation for being dark, dirty, and dangerous, so the design team decided to address this issue and introduced colorful public restrooms with transparent walls.

Shigeru Ban Architects: “There are two things we worry about when entering a public restroom, especially those located at a park. The first is cleanliness, and the second is whether anyone is inside. Using the latest technology, the exterior glass turns opaque when locked. This allows users to check the cleanliness and whether anyone is using the toilet from the outside. At night, the facility lights up the park like a beautiful lantern.”

However, these restrooms may cause a new worry for some people. Will the smart glass function all the time properly? Can it unexpectedly become transparent at the most inappropriate moment?

The interior design firm Wonderwall led by Masamichi Katayama proposed a public toilet block that is intended to resemble a simple park object rather than stand out as a building. The project is inspired by the kawaya, a type of toilet used in Japan in the Neolithic times of the early Jomon period (10,000 to 6,000 BCE). There were primitive huts often made of hardened soil or pieces of wood bound together. 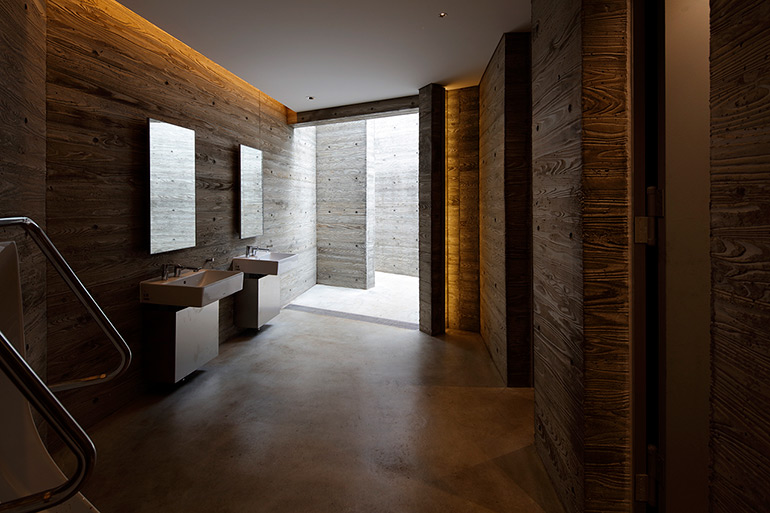 Masamichi Katayama: “Trying to envision the appearance and atmosphere of the primitive kawaya of the past, we built an ‘ambiguous space’ that is simultaneously an object and a toilet by randomly combining 15 concrete walls. The spaces between the walls lead users into three different areas designed for men, women, and everyone. The design creates a unique relationship in which users are invited to interact with the facility as if they are playing with a curious piece of playground equipment.”

Ebisu East Park is also known as Octopus Park because of its playground equipment resembling an octopus. Pritzker Prize-winning architect Fumihiko Maki and his team have titled their project the Squid Toilet, hoping it will become a popular addition to the park.

The project site is a popular neighborhood park that is used as a children’s playground. The architects wanted this facility to function not only as a public restroom but also as a public space that serves as a park pavilion equipped with a rest area. 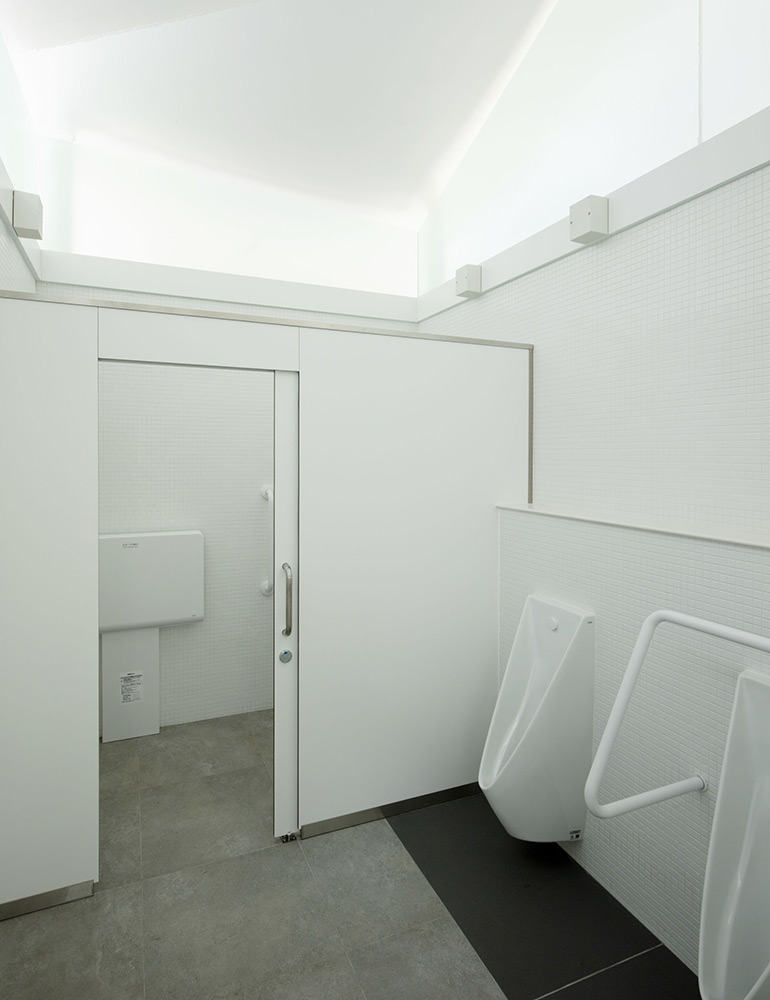 Fumihiko Maki: “Thinking about a variety of users, from children to people on their way to work, we wanted to create a safe and comfortable space that uses a decentralized layout to allow for good sight lines throughout the facility. The cheerful roof that integrates the different sections promotes ventilation and natural light, creating a bright and clean environment while giving the facility a unique appearance similar to playground equipment.”

“This design represents my hope for a society where people from all walks of life feel safe and are able to thrive,” says Nao Tamura, a New York City-based designer and one of the participants of the Tokyo Toilet Project. Her proposal focuses on two aspects — safety and privacy — that Tamura considers to be the most important in forming a comfortable experience for everyone. With this in mind, she created three separate spaces that redefine the way a public bathroom establishes personal space.

The shape of the building is inspired by Origata, a traditional Japanese method of decorative wrapping. “A symbol of gift-giving, this motif embodies the spirit of hospitality towards Shibuya ward’s multinational visitors, and carries my vision to create a safe space that envelopes all users,” says Tamura. The red color was chosen because the designer wanted to create an object that would easily be seen, recognized, and telegraph a sense of urgency. 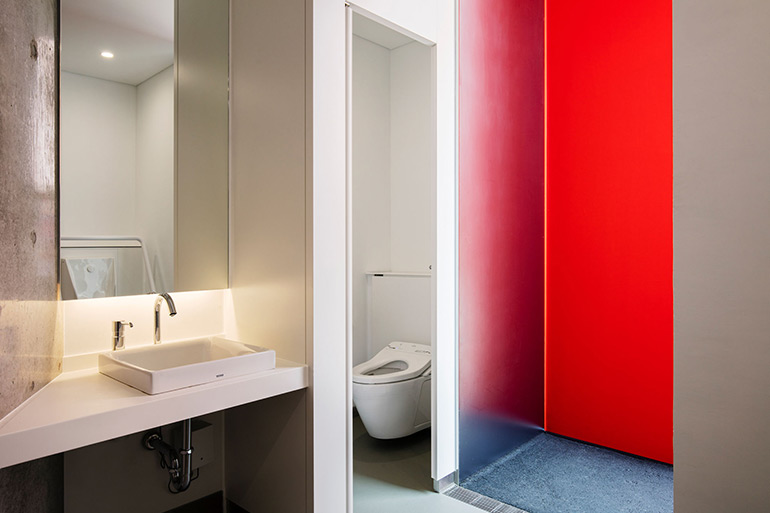 Nao Tamura: “The color Red for me represents ‘safety’ and ‘immediacy’ and my feeling is that a public toilet is simply a utilitarian structure with one purpose only — it is not a place to linger or gather. As a woman, I don’t believe that I am the only one who feels some sense of fear or discomfort when entering an outdoor public bathroom. Especially at night and alone where anyone could possibly walk in.”

Japanese architect Takenosuke Sakakura and his team have designed a public restroom block in Nishihara Itchome Park instead of the former restroom that had been uninviting and rarely used. With this project, the architects strove to improve the image of not only the restroom itself but also the entire park. Their facility is bright and open, and it illuminates the park like a lantern, creating an inviting public space for visitors. 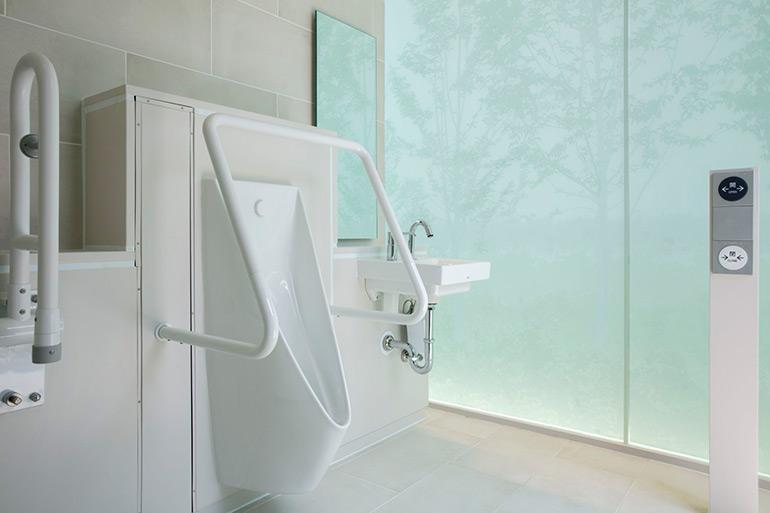 Takenosuke Sakakura: “We thought it was important to create a facility that not only fulfills the basic requirements of a public restroom, such as having enough toilets to ensure a reasonable wait time, but offers a unique appeal that encourages more people to use the facility.”

This year’s last public restroom under the Tokyo Toilet Project recently appears in Jingu-Dori Park. The structure, which resembles a giant umbrella, is designed by Pritzker Prize-winning architect Tadao Ando. The architect titled this project Amayadori, which is translated from Japanese as a shelter from the rain.

Tadao Ando: “I sought for this small architecture to exceed the boundaries of a public toilet to become a ‘place’ in the urban landscape that provides immense public value. Using this clear and simple reasoning for the concept of this structure, I chose to utilize a circle floor plan with a spanning roof and engawa.” 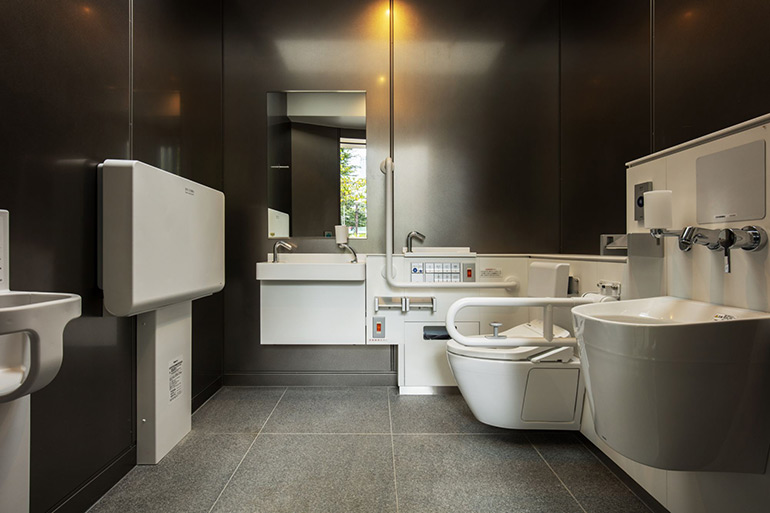 The architect also said that it had been vital for him to make a comfortable and safe space. Vertical louvers were designed to make visitors feel the comfort of the wind and light from the surrounding environment. A feeling of safety is emphasized by the free and centripetal circulation that passes through to the other side.