Designed by BIG – Bjarke Ingels Group, 200 Greenwich Street / 2 WTC is the capstone in the redevelopment of the World Trade Center and the final component of the revitalization of Lower Manhattan.

Located at 200 Greenwich Street and bounded by Church Street to the east, Vesey Street to the north and Fulton Street to the south, the tower will rise to 1,340 feet, respectfully framing the 9/11 Memorial Park alongside One WTC, 3 WTC and 4 WTC. The 80+ story building is developed by Silverstein Properties and will serve as the new headquarters for 21st Century Fox and News Corp, who will occupy the lower half of the tower, housing their subsidiary companies and more than 5,000 people under one roof. 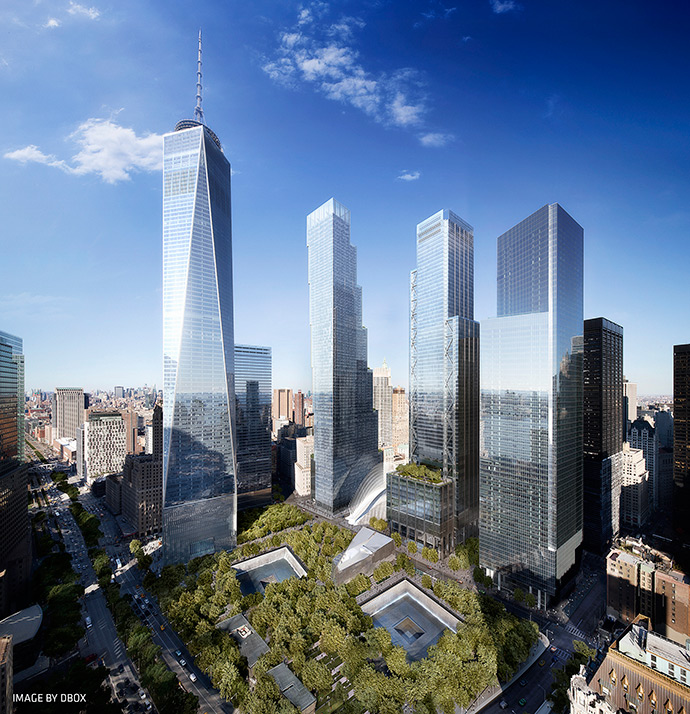 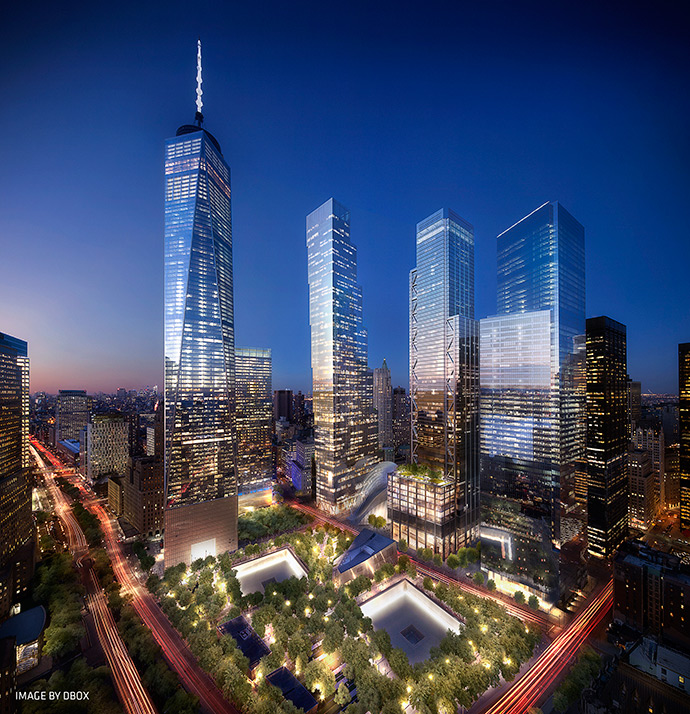 ‘The completion of the World Trade Center will restore the majestic skyline of Manhattan and unite the streetscapes of TriBeCa with the towers downtown. To complete this urban reunification, we propose a tower that will feel equally at home in TriBeCa and the World Trade Center. From TriBeCa, the home of lofts and roof gardens, it will appear like a vertical village of singular buildings stacked on top of each other to create parks and plazas in the sky. From the World Trade Center, the individual towers will appear unified, completing the colonnade of towers framing the 9/11 Memorial. Horizontal meets vertical. Diversity becomes unity.’ 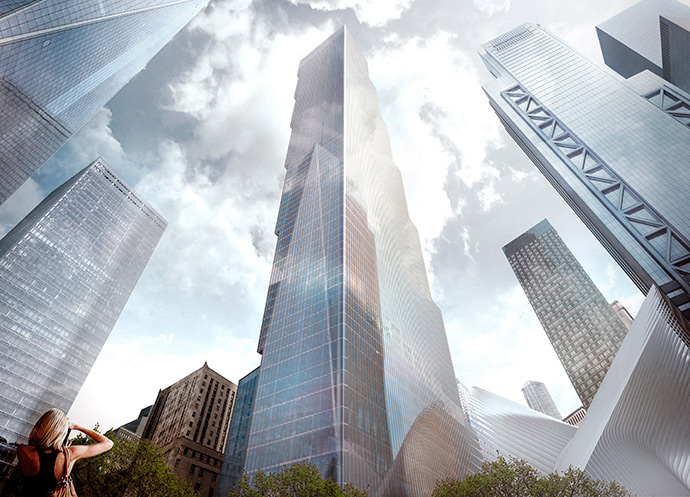 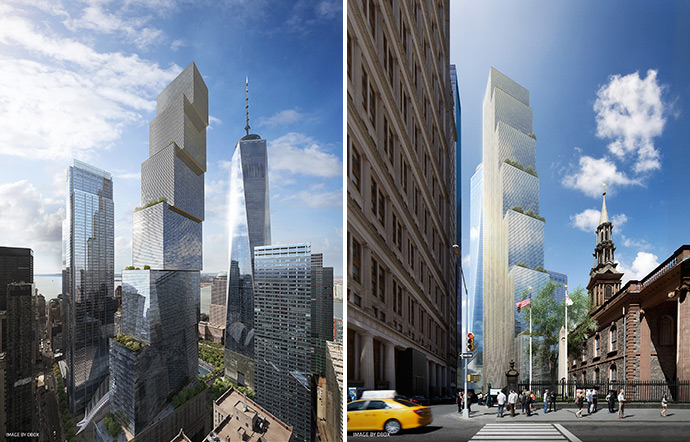 ‘Bjarke Ingels is one of the most innovative and exciting architects in the world today. His conceptual design for 2 WTC fits perfectly into the World Trade Center site, as part of Daniel Libeskind’s Master Plan, and alongside the outstanding work of David Childs, Richard Rogers, Fumihiko Maki and Santiago Calatrava.
While we have a lot of work ahead of us, I am thrilled to partner with 21st Century Fox, News Corp and Bjarke Ingels Group in creating a new architectural icon on what will be Downtown’s fully restored skyline,’ 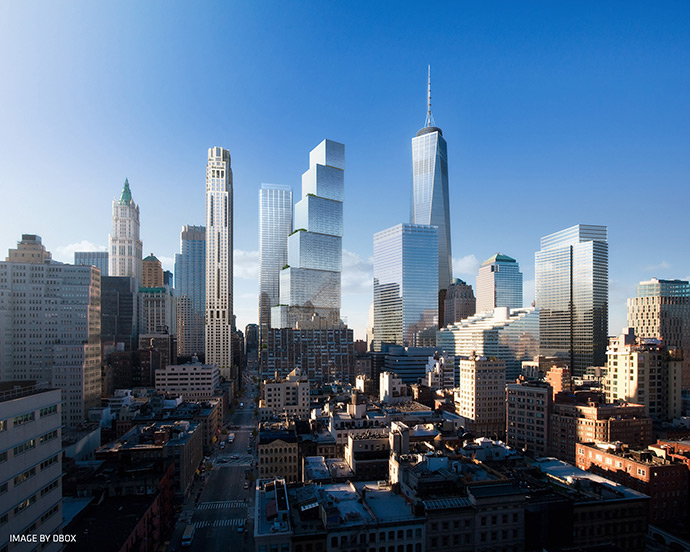 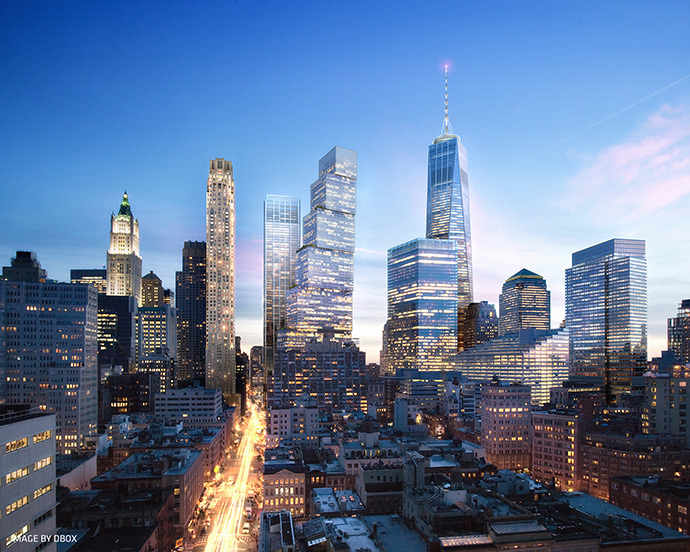 The design of 2 WTC is derived from its urban context at the meeting point between two very different neighborhoods: the Financial District with its modernist skyscrapers and TriBeCa with its lofts and roof gardens. The design combines the unique qualities of each, melding high-rise with low-rise and modern with historical. From the 9/11 Memorial, the building appears as a tall and slender tower just as its three neighboring towers, while the view from TriBeCa is of a series of stepped green terraces. The building is aligned along the axis of World Trade Center Master Planner Daniel Libeskind’s ‘Wedge of Light’ plaza to preserve the views to St. Paul’s Chapel from the Memorial park.

21 Century Fox & News Corp previously said: ’21st Century Fox and News Corp have reached a non-binding agreement with Silverstein Properties (SPI) to locate each Company’s corporate headquarters at a new building to be developed by SPI at 200 Greenwich Street/2 World Trade Center. The Companies would anchor a state-of-the art tower designed by Bjarke Ingels Group (BIG) to house studios, newsrooms and teams from across both Companies’ businesses. The new headquarters would provide 21st Century Fox and News Corp with a range of efficiencies as well as the flexibility for future growth, while helping cement Lower Manhattan as a dynamic new hub for media.’

21st Century Fox and News Corp’s new headquarters will occupy the lower half of the tower, while Silverstein Properties will lease the upper half of the tower to other commercial tenants. Their programmatic needs are concentrated into seven separate building volumes, each tailored to their unique activities. The volumes of varying sizes and depths are stacked on top of each other from the largest at the base to the smallest towards the top. The stacking creates 38,000 sf (3,530 sm) of outdoor terraces full of lush greenery and unprecedented views of the surrounding cityscape, extending life and social interaction outdoors. The modernist skyscraper and the contemporary interpretation of the pre-modern setback merge in a new hybrid and an exciting addition to the NYC skyline.

‘With the transformation of the Financial District into a vibrant neighborhood for creative companies in media, technology and design, 2 WTC addresses the new demands of the contemporary workspace. Floor plates of varying proportions host a multitude of uses and amenities creating different identities stacked in the sky, each with its own park. As the parks step back, the building steps out to transform the flexible work spaces below to typical office spaces above, creating a silhouette towards the 9/11 Memorial Park that matches the reclining lines of ONE WTC.’ 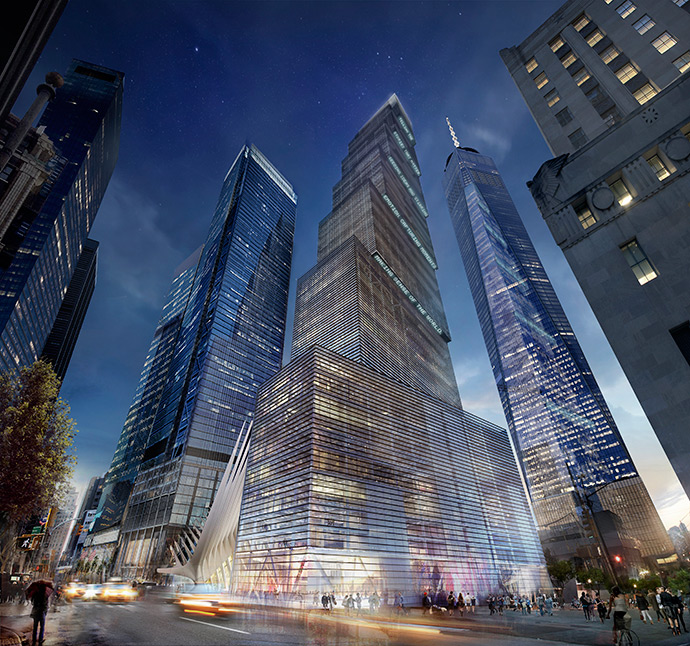 The base of the building utilizes the maximum area of the site, housing TV studios and 100,000 sf (9,290 sm) of retail space over multiple levels. The 38,000 sf (3,530 sm) lobby is connected to the WTC transit hub, providing direct access to 11 subway lines and PATH trains. A public plaza at the foot of the building and access to 350,000 sf (32,516 sm) of shopping and restaurants in the adjacent transportation hub and concourses will ensure life and activity in and around the new World Trade Center. 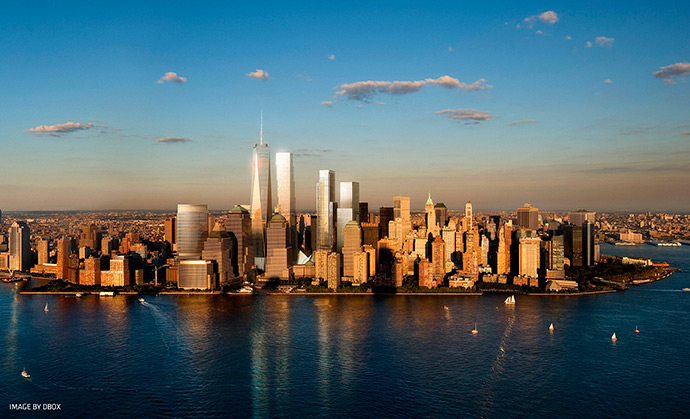 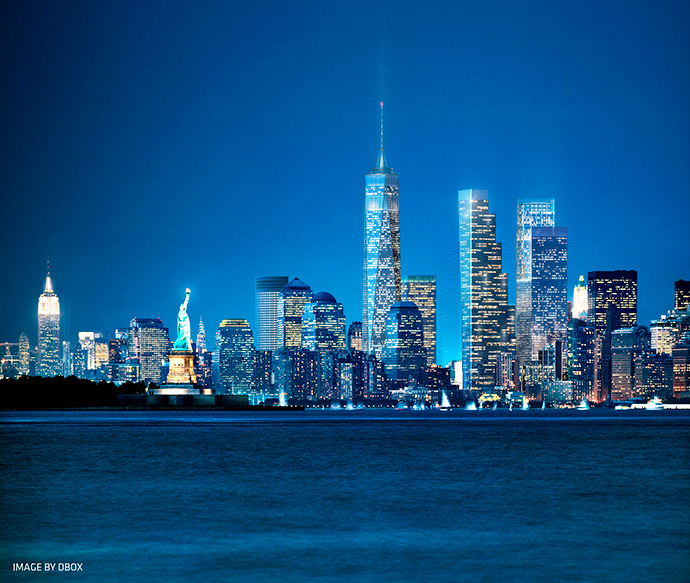 The new building will provide the physical environment for collaboration and idea sharing through the internal mix of open workplaces, amenities and informal meeting spaces. Large stairwells between the floors form cascading double-height communal spaces throughout the headquarters. These continuous spaces enhance connectivity between different departments and amenities, which may include basketball courts, a running track, a cafeteria and screening rooms. The amenity floors are located so that they feed directly out onto the roof top parks.

‘More than any other city New York is fueled by the energy and creativity that sparks from people of multiple cultures, religions, races, languages and professions living and working together. The sculptural form of the 2 World Trade Center – composed of many individual buildings forming a single silhouette – appears like an architectural manifestation of the founding motto of this country: “E pluribus unum” – “Out of many, one”.’