Swedish designer Simon Morris combined magnetic levitation principles, Tesla’s laws of induction and classic Edison’s light bulb to create FLYTE – an elegant lamp that hovers without any support and is powered through the air.

Morris dreamt of having his own hoverboard since he was 16, and after 15 years he created the first prototype. Later, working with brands like Nike and Urbanears, he started levitating other objects – shoes, headphones and speakers – and experimenting with Nikola Tesla’s wireless power technology. Finally, these experiments resulted in FLYTE.

FLYTE consists of two separate parts – a base and a light bulb. Being installed over the base, the light bulb can remain floating in the air endlessly (of course, if the base is connected to a power supply). Moreover, it can rotate continuously with almost no friction. Turning the light on and off is also simple and elegant – you only need to touch the surface of the base. The light will turn on and off while the levitation will remain intact.

Each base is designed and crafted in Sweden from sustainably sourced oak, ash and walnut. The base can also charge smartphones that feature wireless charging – you need just place your mobile device on the top of the base. The hardware and electronics consist of an electromagnetic base, sensors and a power adapter. The lamp doesn’t have any batteries, and its low-voltage LEDs make it completely safe and harmless. 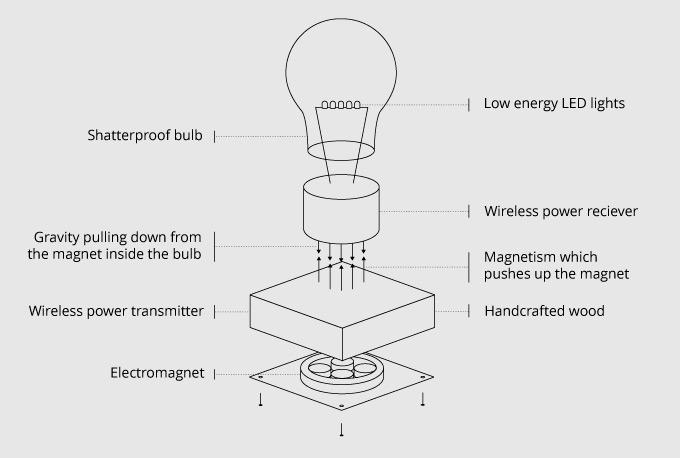 The project recently appeared on Kickstarter and it need $80,000 for further development and production.