BIG + A+Architecture + Egis + Base + L’Echo + Celsius Environnement + CCVH have been announced winner of the international design competition for the new Cit? du Corps Humain (Museum of the Human Body) in Montpellier, France.

The Museum of the Human Body, which will be part of the newly developed area Parc Marianne, is rooted in the humanist and medical tradition of Montpellier and its world renowned medical school, which dates back to the 10th century. The new Museum will explore the human body from an artistic, scientific and societal approach through cultural activities, interactive exhibitions, performances and workshops.

The 7,800 m? (ca. 84,000 sqf) museum is conceived as a confluence of the park and the city – nature and architecture – bookending the Charpak Park along with the Montpellier city hall. The building’s program consists of eight major spaces on one level, organically shaped and lifted to form an underlying continuous space. Multiple interfaces between all functions create views to the park, access to daylight, and optimizing internal connections.

‘Like the mixture of two incompatible substances – oil and vinegar – the urban pavement and the parks turf flow together in a mutual embrace forming terraced pockets overlooking the park and elevating islands of nature above the city. A series of seemingly singular pavilions that weave together to form a unified institution – like individual fingers united together in a mutual grip’, explains Bjarke Ingels.

The museum’s roof functions as an ergonomic garden – a dynamic landscape of vegetal and mineral surfaces that allow the park’s visitors to explore and express their bodies in various ways – from contemplation to the performance – from relaxing to exercising – from the soothing to the challenging.

The fa?ades of the Museum of the Human Body are transparent, maximizing the visual and physical connection to the surroundings. On the sinuous fa?ade that oscillates between facing North and South, East and West, the optimum louver orientation varies constantly, protecting sunlight, while also resembling the patterns of a human fingerprint – both unique and universal in nature. 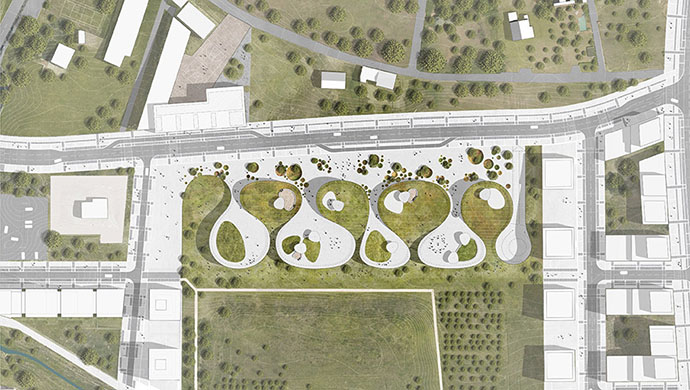 The jury, headed by the City’s Mayor Ms H?l?ne Mandroux, chose BIG over 5 other shortlisted international teams and praised BIG’s design for combining innovative, environmental and functional qualities. The new Museum will contribute to Montpellier’s rich scientific and cultural heritage, attracting tourists, families, as well as school classes, academics and art lovers. Construction is scheduled to start in 2016, and the building will open its doors to the public in 2018.

The Museum of the Human Body follows BIG’s experience in Museum Design as well as contributes to BIG’s growing activities in France. BIG recently completed the Danish National Maritime Museum, in which crucial historic elements are integrated with an innovative concept of galleries. Other current cultural projects include the LEGO House in Billund, the recently announced Blaavand Bunker Museum in Western Denmark, and MECA Cultural Center in Bordeaux, along with EuropaCity, an 80 hectare masterplan on the outskirts of Paris.