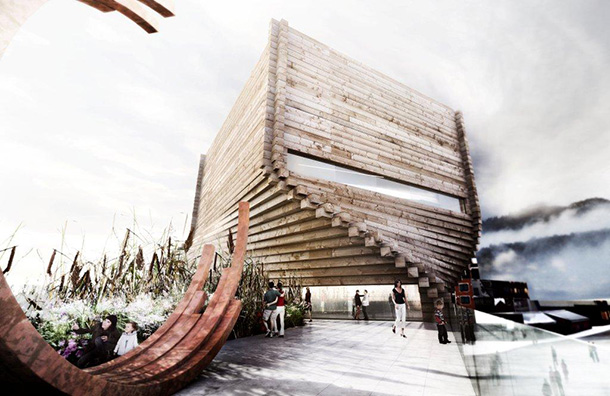 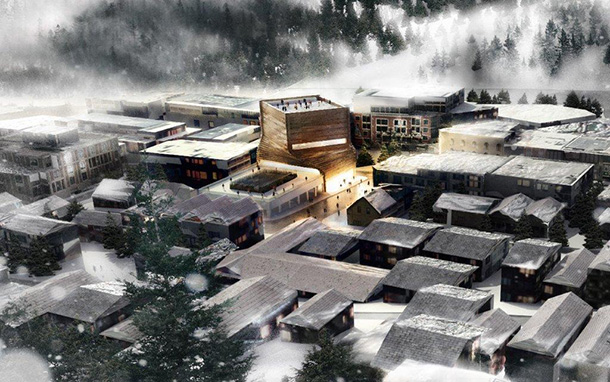 The Kimball Art Center, home to Sundance House during the Annual Sundance Film Festival, invited an international group of architects to submit designs for an interior renovation of the existing Kimball Art Center and the construction of a new building directly adjacent to the original, located centrally in Park City, Utah. The winning project, announced by The Wall Street Journal this past weekend, was selected by an official jury while giving voice to the visitors of the Kimball Art Center – including those who recently attended the ten day Sundance Festival in January. The construction is expected to begin in mid-2013, with completion by 2015. Other finalists included major U.S based offices, including Brooks + Scarpa Architects, Sparano + Mooney Architecture, Will Bruder + Partners Ltd., and Tod Williams Billie Tsien Architects. 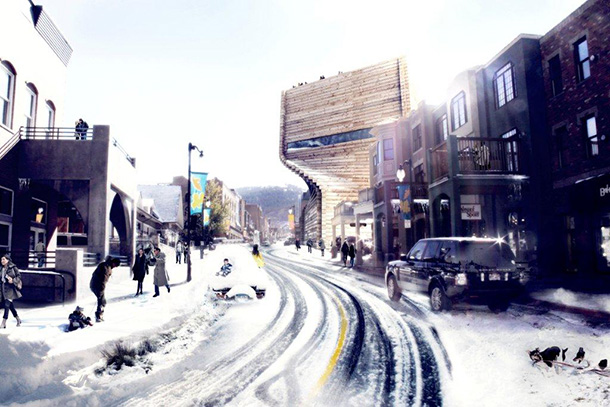 Maurice Cox, Jury Member and architectural educator at the University of Virginia, former director of Design for the National Endowment for the Arts: ‘It was hard for the jury to choose between the five excellent finalists. BIG won the competition by proposing an iconic building that honors the spirit of Park City’s past and looks ahead into the 21st century. BIG’s design boldly reinterprets the Kimball Art Center’s place in the city skyline with this amazing new structure for the arts.’ 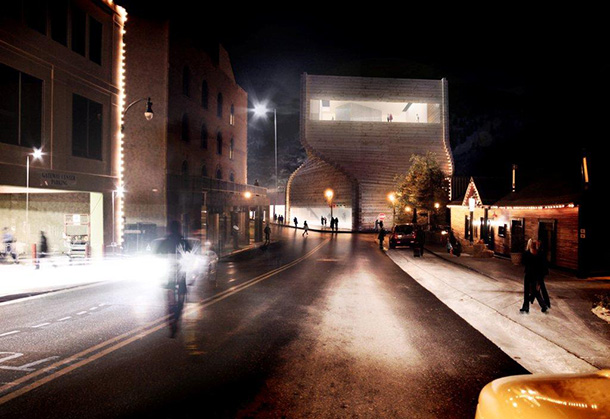 BIG’s design for the new Kimball Art Center, inspired by the urban development of Park City, the Kimball site, and the city’s mining heritage, envisions the building as an anchor for the street life on Main St. and as a gateway and landmark for Park City. The new Kimball is designed with the flexibility, character and personality necessary to become a natural incubator for public life. 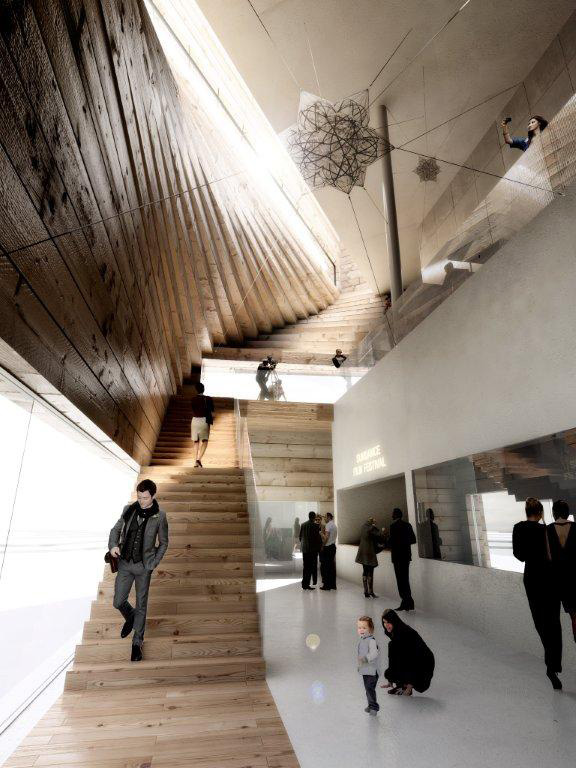 Robin Marrouche, Executive Director, Kimball Art Center: ‘BIG built the strongest case for the continuity of Park City’s history—a bold, poetic new landmark to resurrect the spirit of the Coalition Mine Building that burned down in the 1980s. The design concept supports our mission to present engaging exhibitions, education, and events, and enhances the natural flow between the three in a uniquely free-form way. As the Kimball Art Center expands in scope and reputation, embracing both the local community and a growing group of international visitors and art collectors, BIG’s design sets a course for the future.’ 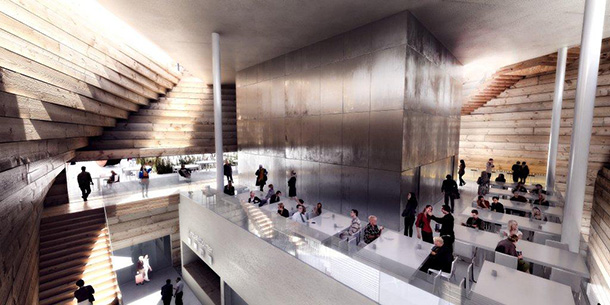 At 80 feet, the new Kimball Art Center matches the height of the formerly neighboring Coalition Building. The building footprint and lower gallery sit in relation to Main St. and the city grid, and as the building rises it turns to greet visitors entering the city via Heber Ave, creating an iconic yet contextual building at the city’s doorstep. Referencing Park City’s mining heritage, the fa?ade is constructed of massive stacked timber elements, creating an open publicly accessible space inside. 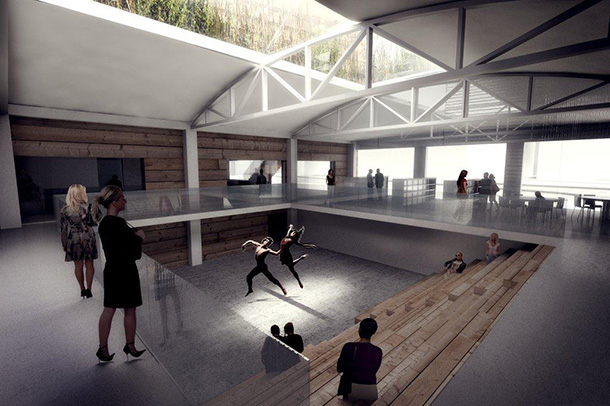 Bjarke Ingels, Founding Partner, BIG: ‘The raw charm of Park City and the Kimball Art Center is rooted in a culture of appropriating the structures of past industry to accommodate spaces for cultural life and leisure. The plumes of smoke from the chimneys have turned into clouds of snow from the snow cannons. The old garage is now an art museum.  With our design for the new Kimball we seek to continue this tradition by using the construction technique of the old mines and the railroad trestles that have marinated for decades in the Great Salt Lake to create a raw spacious framework for the art and artists of Park City – a very traditional material and technique deployed to produce a highly contemporary expression. Where the Coalition Building once stood as a landmark for Park City as a mining town– the new Kimball will be a beacon for Park City today as a home for an exploding cultural life and a sprawling creative community.’ 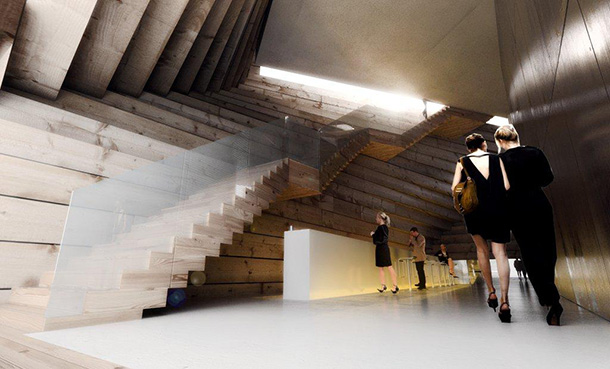 The twisting fa?ade of the building encloses a continuous spiral staircase, leading the visitors from the ground floor to the generous roof terrace, which can be used for outdoor exhibitions and events. Skylights allow light to wash down the gallery walls below. In between the two galleries is a restaurant, which spills out onto a sculpture garden on the rooftop of the existing, historic Kimball Art Center building. 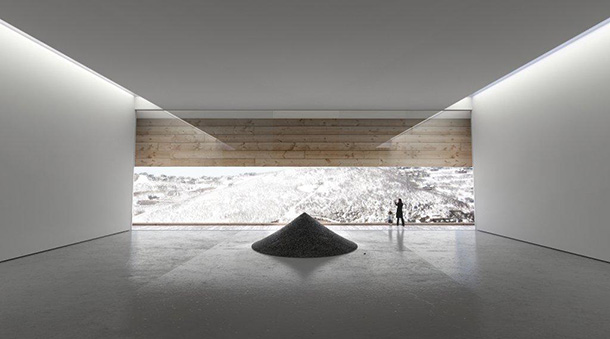 The existing building is converted into an educational hub, complementing the function of the new Art Center. At its heart is a flexible double height auditorium for screenings and exhibitions. During summer, the fa?ade towards Heber Ave opens up to the street and exposes the internal activities. The roof of the existing building is equipped with solar thermal panels concealed by indigenous plants. An outdoor sculpture garden loops around the perimeter of the roof. 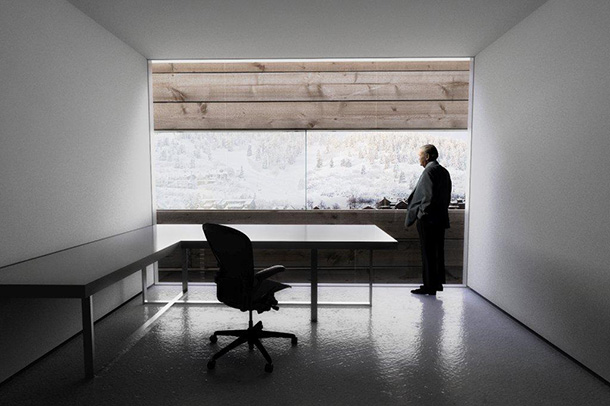 Existing Kimball Art Center. The location of the existing building is oriented towards Park Ave – what used to be the main artery through Park City

Sky gallery. The upper gallery is oriented to Heber Avenue – the gateway to Park City

Unified twist. The volumes are blended together to form a unified twisting building – a new icon to Park City.

Program. Between the two galleries are administration and restaurant functions. The existing building houses the education program and exhibition support functions.

Project name: The Renovation and Expansion of Kimball Art Center