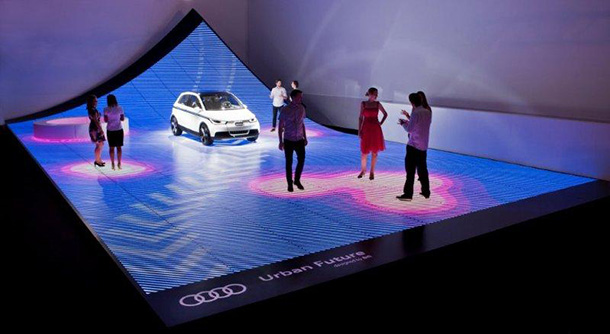 BIG + Kollision + Schmidhuber & Partner team up to bring BIG’s vision of future urban mobility to life for AUDI at Design Miami/ 2011, running from November 30th through December 4th adjacent to Art Basel Miami Beach. BIG originally presented the concept as an entry for the 2010 AUDI Urban Future Award introducing a future city paved with a digital surface that liberates the streets from existing boundaries and allows for a new flexibility of public use. 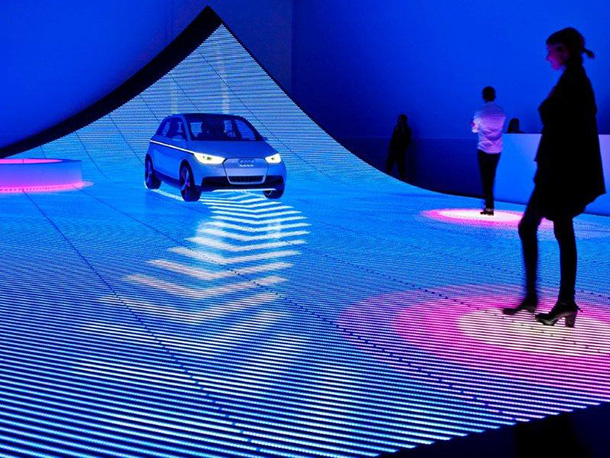 The 190 m2 three-dimensional LED installation provides a glimpse of the future city where the public space is shared between pedestrians and driverless cars. The entire surface would be infused with a continuous flow of information allowing for real-time interaction between vehicles and their environment. Mounted above the Design Miami installation, 3D cameras track the movement of passers-by processing the data into a generative artwork that feeds back into the LED panels. 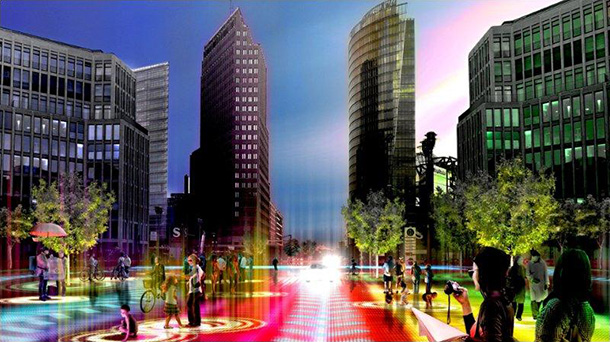 ‘Our pavilion for AUDI renders visible the invisible forces that flow through our city – the driverless car is relying on sophisticated sensory and computational technology that constantly observes and calculates the dynamic space that the living city constitutes. The result is an architecture of movement whose forms have not been predetermined by the architect but are constantly being recomposed by the people populating the pavilion.’ 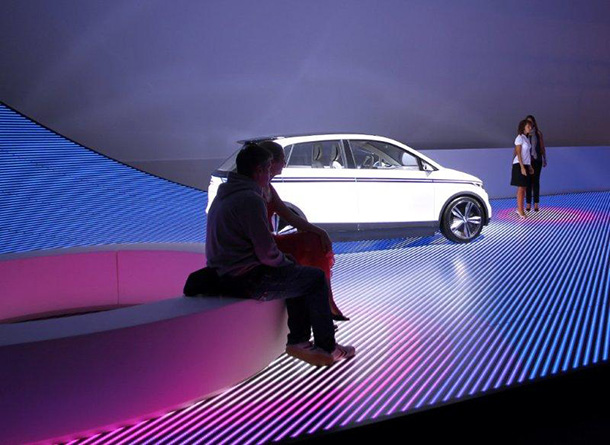 The installation sets the stage for Audi’s showcar, Audi A2 concept, which has its U.S debut at the design fair and is dedicated to future urban mobility, capable of communicating with its environment. The exhibition car continuously emits arrows showing its driving path, navigating real-time between visitors at the stand. 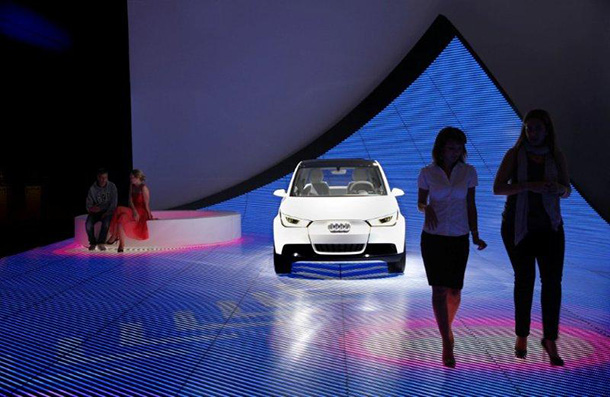 ‘We have created 190 m2 of future public space around the concept car, visualizing how pedestrians and cars interact digitally. Pedestrians are creating digital safe zones and the movement of the car is simulated, navigating between people. We believe that infusing the surface of the city with information technology will create a new kind of true shared space – a condition similar to a public square. In a single day, the function of the street may alternate multiple times between entirely pedestrian, vehicular, or even recreational functions. ‘ 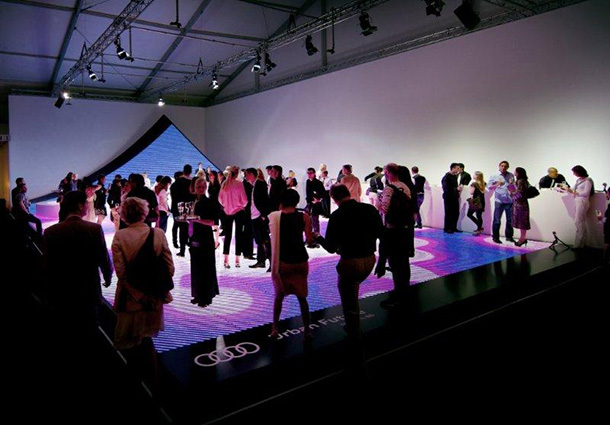 1. Magic carpet. The entire floor is an interactive LED surface that enables real-time interplay between the visitors and the graphic interface. Installed 3D cameras track the movement on site. The data is then processed into a generative artwork that feeds back into the LED panels on the surface.

2. Fold. A simple diagonal fold of the surface creates a backdrop and separates the backstage areas from the exhibition.

3. Hardware. A prototypical show car is the central feature exhibited on the folded interactive LED surface. The stand also includes a bar and several seating elements to accommodate visitors.

4. Software. The car continuously emits arrows showing its future path and leaves a trace of its past track on the LED surface behind it. The furniture is mapped as an oscillating safe zone. As a future version of a traffic light, the digital surface aims to showcase the possibilities of interaction between cars, pedestrians and urban pavements in the scenario of a driverless car.

5. Interaction. All visitors have an immediate real-time impact on the programmed LED surface. Every single movement is traced allowing for the increase of social interaction. If several visitors meet, a cloud entity is generated.